Modular batteries, speakers, and cameras are just the tip of iceberg. 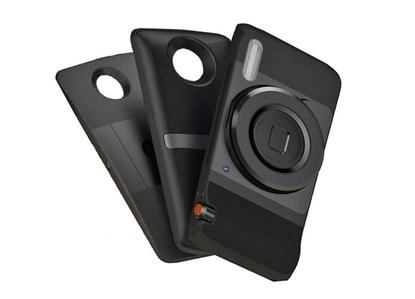 The Moto Z has quickly become the gold standard for modular phones, and it looks like it’s about to get a whole lot more expandability. Speaking at a press briefing last week, Moto promised that a whole new family of new snap-on accessories is on the way.

Moto previously floated the idea of a possible Tango mod, but now CNET reports that the company is committed to releasing 12 magnetic modules per year designed to expand the Moto Z well beyond the capabilities of a normal handset. You can already buy things like a Hasselblad zoom lens, JBL speaker, and Incipio battery pack for the Z, but Moto Mods director John Touvannas said the company’s goal for 2017 “is to get more Mods out this year than we did last year, no question.”

The company didn’t offer any specifics on partnerships or concepts, but feel free to let your imagination run wild. Moto already makes a projector that bumps the size of your phone’s screen from 5.5 inches to 70 inches, so there’s no telling what the company could be cooking up for power users, gamers and gadget lovers.

The impact on you at home: Back when Google announced the since-shuttered Project Ara early last year, the modular phone concept seemed like fanciful, pie-in-the-sky dreaming. But Moto has definitely hit on something with its Mods, and if the company is as serious as it says about expanding the Z’s ecosystem, the technology might be hard to ignore. Smartphone innovation has hit something of a wall, but the Moto Z’s ecosystem has become a real bright spot for future development, and the modular concept could eventually make its way to the Galaxies and Pixels of tomorrow.