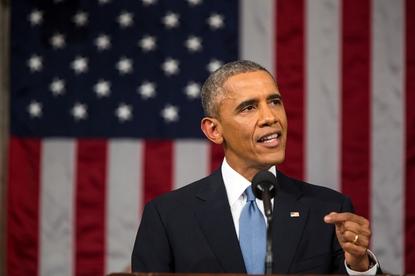 President Barack Obama has set a goal of sending humans to Mars by the 2030s and getting them safely home again.

But that's not his only goal.

In a commentary appearing on CNN.com, Obama set an ultimate goal of setting up a habitat on Mars so astronauts can live there for an extended time.

"When our Apollo astronauts looked back from space, they realized that while their mission was to explore the moon, they had 'in fact discovered the Earth,' " Obama wrote. "If we make our leadership in space even stronger in this century than it was in the last, we won't just benefit from related advances in energy, medicine, agriculture and artificial intelligence, we'll benefit from a better understanding of our environment and ourselves."

Talking about his "sense of wonder" about the U.S. space program, Obama wrote about the country's next chapter in space exploration – Mars.

"Within the next two years, private companies will for the first time send astronauts to the International Space Station," he added. "The next step is to reach beyond the bounds of Earth's orbit. I'm excited to announce that we are working with our commercial partners to build new habitats that can sustain and transport astronauts on long-duration missions in deep space. These missions will teach us how humans can live far from Earth -- something we'll need for the long journey to Mars."

Obama's post seems to be part of the launch of the White House Frontiers Conference being held Thursday at Carnegie Mellon University and the University of Pittsburgh.

Obama is set to host the conference, which will bring together scientists, engineers, entrepreneurs and students to discuss the U.S.'s future in science and technology.

The conference will explore such area as the future of medicine and health care, interplanetary science, personal technology and the national implications of technological research.

"Getting there will take a giant leap. But the first, small steps happen when our students -- the Mars generation -- walk into their classrooms each day," wrote Obama. "Scientific discovery doesn't happen with the flip of a switch; it takes years of testing, patience and a national commitment to education."