Each bit is represented by a single atom 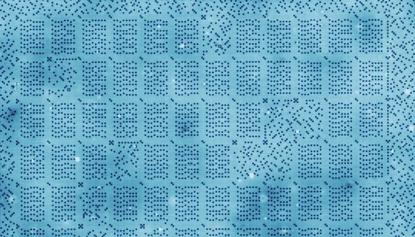 Dutch researchers have discovered a method of storing atom-sized bits on copper with a density of 500 Terabits per square inch (Tbpsi) -- 500 times more dense than the best commercial hard disk currently available.

"In theory, this storage density would allow all books ever created by humans to be written on a single post stamp," lead scientist Sander Otte said in a statement.

The research, published today in the journal Nature Nanotechnology, details how the scientists were able to construct a 1-kilobyte (8,000-bit) memory unit where each bit was represented by the position of one single chlorine atom on a copper surface. Researchers have been experimenting with atomic- and molecular-sized storage since the 1990s. Most recently, Microsoft and the University of Washington (UW) said they broke a world record by storing 200MB of data on synthetic DNA strands.

The Dutch scientists from the Kavli Institute of Nanoscience at Delft University said they were able to create their data storage by pressing bits onto copper with a scanning tunneling microscope (STM), in which a sharp needle probes the atoms of a surface, one by one. The probe not only sees the atoms on the copper, but it can also "push" the atoms around to rewrite the bits of data.

"You could compare it to a sliding puzzle," Otte said.

The researchers organized their memory in blocks of 8 bytes (64 bits) and gave each block a marker made of the same type of holes as the "raster," or scanned pattern of chlorine atoms, contained within it. That way, the data can be easily located and read.

The researchers said their discovery was inspired by the pixelated square barcodes (QR codes) often used to scan tickets for airplanes and concerts. "These markers work like miniature QR codes that carry information about the precise location of the block on the copper layer," they said.

The code will also indicate whether a block is damaged, for instance, due to some local contaminant or an error in the surface. That allows the storage medium to be scaled up easily to "very big sizes," even if the copper surface is not entirely perfect.

There is a catch, however: The memory only works in temperatures achieved through the use of liquid nitrogen or -321 degrees Celsius. Otte, however, said now that the team has discovered a method using chlorine and copper it will look for methods using other materials that might be able to store bits at room temperature.

"The new system...still requires considerable work before it's ready for prime time, but it's an important proof-of-principle that lays the groundwork for the development of useable atomic-scale data storage devices," Otte wrote in a post on Linked-In.