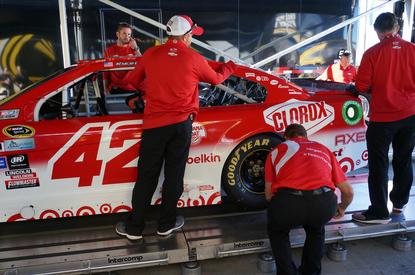 When cars leave the starting line at Sonoma Raceway in California on Sunday for the start of the Toyota/Save Mart 350, they'll be taking part in the launch of a product designed to help NASCAR officials monitor and manage the 110-lap race.

New race management software that NASCAR is launching on Sunday is designed to give officials a single screen to watch where cars are on the racetrack, manage penalties and share information with racing teams about what's going on.

It arose from a partnership between NASCAR and Microsoft that started in 2014. It began with a mobile inspection app that let race officials see whether cars were in compliance with all the rules about how they have to be constructed.

The race management app, which runs on Windows 10, shows track officials a live feed with the locations of all the cars on the track, represented by dots. Officials can pair that with live video of the race. The app also pulls in video footage from pit stops so officials can see whether drivers broke any of the myriad rules for how to refuel and re-equip a car.

The software can also be used to make sure cars are in the right order after a crash or a caution procedure. On top of that, race officials can use it to take a screenshot of what they're seeing and email or text it to someone else, which is helpful for getting key information down to racing teams.

All these capabilities can replace different six different apps and processes that race officials used in the past. Under the old system, some officials worked with multiple monitors to handle all the things they needed to do. The new app should reduce the need for all that complexity.

After the race is over and the cars have been packed up, race officials will be able to return to the management software and replay the entire race. That's critical for conversations with teams that may take place after the race, in which officials can explain the decisions they made.

Not surprisingly, the back end of the system is powered by Microsoft Azure, with an interesting twist: NASCAR is actually using the still-in-beta Azure Stack software to manage a mobile data center it brings to every track for processing of data during a race.

The data center is designed both to help with limited connectivity at some racetracks and to reduce the latency between when data is taken in and when it's displayed in the race management software.

Before the cars even hit the track, they're inspected by officials who are recording every infraction in a tablet app, which replaced paper inspection sheets. That app, which was released in 2014 and ran on Windows 8.1, has been updated for Windows 10. NASCAR is also testing its use for paint scheme and decal verification, which has been a time-consuming part of the inspection process.

With digital inspections, officials are now faster at making sure that cars comply. Plus, NASCAR staff can look at inspection findings as they go through the process and after the race has been run.

Microsoft is no stranger to working with sports organizations. The company has a high-profile, multi-year partnership with the NFL to provide teams with Surface tablets for use on the field, in addition to building applications that let fans view detailed player telemetry.

Looking toward the future, Microsoft is working with NASCAR to figure out how data collected from races can be used to provide additional context and drama to the experience of watching the events, similar to what it's doing with the NFL.

"So we could throw a lot of stats at people, but that doesn't necessarily make it a more dramatic event. That doesn't make the race more interesting," Microsoft Principal Evangelist Mike Downey said during a press conference discussing the new apps. "The real art is, how do you best present information like that so that you're creating drama, you're creating moments that people really are attached to?"

In addition, Downey said he is looking forward to applying Azure Machine Learning to the applications that NASCAR is using. That has the potential to help officials predict things during a race.

Fred Prendergast, a NASCAR engineer who works on vehicle inspection tools and procedures, said he hoped the inspection data would make its way to fans in the future, so they can follow their favorite driver's journey to the racetrack and see what's happening with his car.