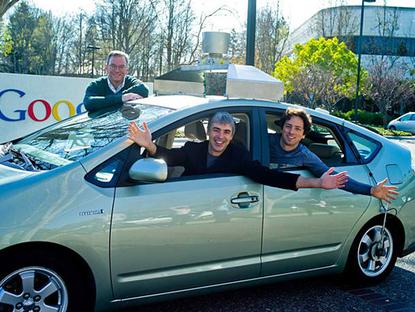 Perhaps the most famous potential future transportation method is Google's driverless car. As described by the company, the cars use video cameras, radar sensors and laser range finders to drive. They've already hit the road, logging more than 300,000 miles without an accident, Google engineers recently reported. One of the coolest features of the car (in our opinion): It can go through a Taco Bell drive-through!

The company released a report in accordance with regulations from the California Department of Motor Vehicles for autonomous vehicles. In the report, Google noted that from Sept. 24, 2014 to Nov. 30, 2015, test drivers in Google's fleet of self-driving cars had to take control from the autonomous system 341 times.

Of those disengagements, 272 were because of detected technology failures.

More critically, Google reported 69 incidents where "safe operation of the vehicle" required the driver to take over. Of those, Google later determined that 13 of the incidents would have resulted in the car's running into something if the test driver had not taken control of the vehicle.

The company reported that at the end of November, Google had operated its autonomous cars for more than 1.3 million miles. Of that total, 424,331 were driven on public roads in California and the majority of them were in a suburban environment in and around Mountain View, Calif., where Google is headquartered.

Google also said that its fleet of driverless cars are averaging 30,000 to 40,000 miles per month.

The company also pointed out that operating the autonomous cars in an urban environment, instead of just on highways, means navigating in more complex road systems and intersections, and around cyclists and pedestrians.

"This differs from the driving undertaken by an average American driver who will spend a larger proportion of their driving miles on less complex roads such as freeways," Google stated. "Not surprisingly, 89% of our reportable disengagements have occurred in this complex street environment."

While dealing with failures is part of the testing process for any new technology, the report may mean that Google is further away from having autonomous cars in the market than expected, according to Patrick Moorhead, an analyst with Moor Insights & Strategy.

"The technology needs to be held to the standard of consumers who expect that technological incidents would arise at virtually no time," Moorhead said. "I believe that we are three to five years from the technology to be where it needs to be."