Dell and Microsoft announce 'Azure in a box' for $9,000 a month at Dell World 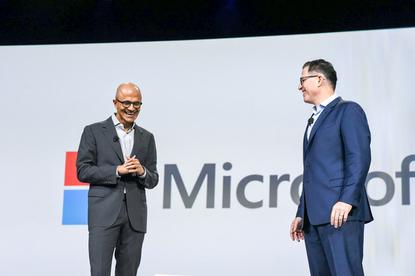 Dell and Microsoft have teamed up to sell a converged system that combines servers, storage and software in an integrated box which they say can connect easily to Microsoft's Azure cloud services.

Called the Cloud Platform System Standard, it's aimed at customers building out a hybrid cloud environment, one in which on-premises equipment is linked to the public cloud for services like backup and recovery, or to provide more compute and storage capacity when it's needed.

It's a model most of the big IT vendors are pushing, including Hewlett-Packard, Cisco and Oracle. Dell and Microsoft claim their system is different because it runs basically the same software stack that Microsoft uses in its public cloud, making it easy for the on-premises and cloud components to work together, although that's a claim Oracle is making too.

Cloud Platform System Standard is actually a smaller version of a similar product the companies introduced a year ago, called Cloud Platform System Premium. But while the first product occupied basically an entire server rack, with a minimum buy-in of 32 compute nodes, the standard edition starts with four nodes, scaling to a maximum of 16.

That lowers the entry point and makes it feasible for smaller companies to deploy, and Dell says it's come up with a novel subscription pricing model to reduce the investment risk for companies trying to set up a hybrid cloud for the first time.

The basic configuration is enough to run about 100 virtual machines, and the system can scale to support about 400, according to Glenn Keels, Dell's executive director for cloud, HPC and integrated systems.

After six months, customers can buy the system outright, return it, or extend the same payment scheme for another six months, he said. They can also move to a new payment model Dell is offering where they rent the system and pay only for the capacity they use.

Vendors are pushing the hybrid model hard, but the complexity of putting the software and hardware together has been a barrier. Having a system from two close partners like Dell and Microsoft, with a flexible pricing model, could make the new system appealing.

"The pricing model is pretty incredible; you only get charged for what you use, which basically removes every objection from a financing perspective," said Patrick Moorhead, principal at Moor Insights & Strategy.

Customers can put together their own system using OpenStack, but having Dell and Microsoft do the work for them is appealing, he said.

Ryan O’Hara, director of program management for Microsoft Private Cloud Solutions, told reporters in a briefing that customers can get the product from a bare metal state to running a basic set of Azure services in as little as three hours.

Dell provides support for the entire system, he said, so customers don't have to figure out which vendor they need to call if something goes wrong.