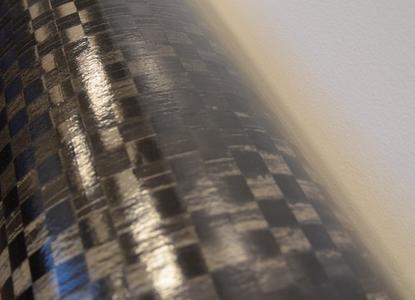 A carbon fiber tube mockup, which would hold the battery for Facebook's Aquila aircraft.

At 140 feet, it has the wingspan of a Boeing 737, but carries no passengers -- and it's much lighter too, weighing in at no more than 1,000 pounds. And within the next couple months, Facebook hopes to get its drone off the ground on an inaugural test flight.

Named Aquila, the aircraft is the product of more than a year's work at the social networking giant. Its function is not to drop retail items from the clouds like Amazon's drones, but to provide Internet access to the hundreds of millions of people who don't have it in under-served parts of the world. Facebook aims to partner with carriers and other companies to provide connectivity, potentially at a lower cost than typical infrastructure like cell phone towers.

The drone is just one element in the company's master plan to improve Internet access, which also includes satellites and data-carrying laser beams. But it might be the most awe-inspiring.

"If you think about these little quadcopters, that's not what we're building," said Jay Parikh, Facebook's global head of engineering, during a talk on the status of the company's efforts at Facebook's headquarters in Menlo Park, California, on Thursday.

The plane's entire surface is covered with solar panels. It's meant to stay up in the air for three months at a time, at an altitude between 60,000 and 90,000 feet. That's above commercial airlines and above the weather. It could potentially provide Internet access to people in a 50 kilometer radius, Facebook says.

Facebook has been flying scale models of the plane at altitudes of less than 400 feet. After on-the-ground testing, the company is now close to being able to launch the Aquila for a test flight, possibly at a location in the U.S., Parikh said.

The plane itself will receive Internet connectivity from a free space optical communication system, or lasers, also developed by Facebook. The lasers use light to transmit data through space. In this case, the laser system will beam an Internet signal to the plane from the ground.

Facebook claims to have reached an historical milestone with its laser system: It's capable of beaming data at the rate of tens of gigabits per second.

That rate, and higher rates, is routine for the fiber optics in data centers. But to achieve that rate through space and air, "it's never been done before," said Yael Maguire, Facebook's engineering director of connectivity.

With its aircraft, Facebook would be entering the skies as they are poised to become more crowded with devices made by other companies like Amazon and Google. Just this week, Amazon proposed a drone superhighway.

Google, meanwhile, has developed balloons to beam down LTE cellular signals. They're meant to fly in Facebook's desired zone, between 60,000 and 90,000 feet. The company so far has launched at least hundreds of test balloons, and it's close to launching thousands.

During the talk, Facebook engineers said they still need to sort out the regulatory issues involved in flying Aquila.

For Facebook, Google's existing presence in the stratosphere looms large. To launch, Aquila will require a helium balloon, which will get it above commercial airspace quicker, Facebook engineers said.

They didn't say whether Aquila would rise above Google's balloons.