Oracle and Google to return to court for Android battle

The companies will battle over Google's use of Java in Android 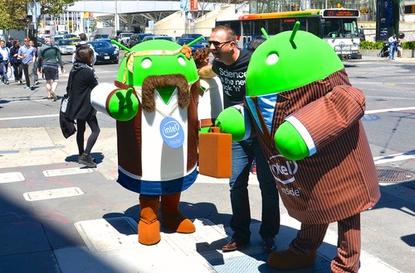 Oracle and Google have each proposed dates next northern spring for a new jury trial in their dispute over Google's use of Java in Android.

Oracle sought roughly US$1 billion in damages at the last trial, and that figure appears set to increase significantly given Android's success in the three years since.

Some software developers are watching the case closely, fearing an outcome in Oracle's favor will limit their freedom to write code that works with proprietary applications.

In court papers filed late Thursday, Oracle proposed next April 4 for the trial to begin, while Google proposed May or June.

Since it filed its lawsuit five years ago, Oracle has pushed to move the case along as quickly as possible. On Thursday, it objected to Google's proposed trial date because Oracle's fiscal year ends May 31, and it says its key executives will be busy. It will be up to the judge to decide the date.

Oracle says Google infringed its copyrights when it copied some of the most common Java application programming interfaces into Android. Google did this, according to Oracle, because it wanted to make it easy for Java developers to write apps for Android.

Google says its use of the APIs is protected by "fair use," which allows copying of creative works in some circumstances. Google argues, among other things, that it had no choice but to use the APIs because they're a basic, functional part of Java.

In the first trial, which wrapped up two years ago, a jury found Google had infringed Oracle's copyrights but was split on the question of fair use. That's the part the new jury will have to decide, along with any damages Oracle might be entitled to.

Earlier this week, Oracle asked to update its original complaint to reflect Android's success over the past five years. Android has "come to permeate the fabric of our society," Oracle wrote, while its own Java platform has "suffered more than ever."

Those factors mean Oracle will push for higher compensation for Google's alleged infringement. As Google acknowledged in the filing Thursday, "Oracle's damages request is likely to increase significantly since the last trial."

The case will be heard at the U.S. District Court in San Francisco.