The Cloud is too hard, so Intel launched a sweeping project to fix it 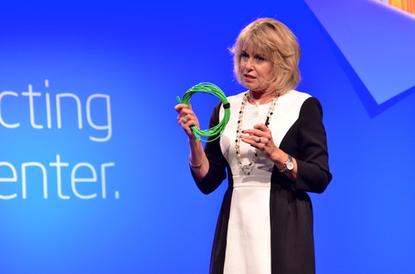 Intel's Diane Bryant at an event in San Francisco on April 9, 2013

Intel has kicked off a broad effort to speed the adoption of the modern cloud infrastructure, which it says has been slow to take off because the software is complex and takes too long to deploy.

"Most people look at the market and say 'The Cloud is on fire'," Jason Waxman, head of Intel's Cloud infrastructure group, told reporters. "We're in a position to say, 'You know what? It's not moving fast enough.'"

To speed its growth, Intel has kicked off a multi-pronged effort, called the Cloud for All initiative, that includes hiring hundreds of additional engineers to work on open-source cloud software, setting up two massive compute clusters where companies can test and validate applications, and making further investments and acquisitions itself.

Its first move is a partnership with Rackspace to make the popular OpenStack Cloud platform enterprise-ready and easier to use. Intel and Rackspace will hire hundreds of engineers at a development center near San Antonio, Texas, to work on OpenStack components such as its scheduling software, network capabilities and container services.

The goal is not to create "yet another OpenStack distribution," Waxman said, but to improve "the overall health of the project." The companies will also make OpenStack easier to scale.

"Today at best, the most successful OpenStack deployments scale to a few hundred nodes," he said. "Our goal is to enable enterprise class features at scale for thousands of nodes,"

Within six months, Rackspace and Intel will provide developers with free access to two 1,000-node compute clusters where they can test their applications, and Rackspace will offer training programs around the software. Intel picked Rackspace to work with because it's an original developer of OpenStack and runs one of the largest OpenStack public Clouds.

The Cloud is a fuzzy term but Intel is referring generally to an architecture in which applications are virtualised, or running in software containers, and can be set up and pulled down with high levels of automation.

The architecture is said to help IT departments cut costs and respond to business needs more quickly. But while large companies like Amazon and Google have turned it into a science, most businesses are struggling to get there.

The problem, as Intel sees it, is that choosing and deploying the software to build a Cloud is too complex for most companies to handle. There's an abundance of hypervisors, orchestration software and developer environments, and within those options there are further configuration choices to be made.

"That makes it hard to build a fully functional, reliable cloud stack. It takes a lot of expertise," said Diane Bryant, the senior vice president in charge of Intel's data center group.

Deployments take months to complete and customers end up with systems that are "like snowflakes," she said -- "unique and a bit fragile."

The work with Rackspace is only the first step in the Cloud for All initiative, in which Intel will work with other partners to simplify and build out components for a "software defined infrastructure."

Intel's goal is to enable "tens of thousands" of new public and private Clouds to be built, and to enable a typical enterprise to build a "full functioning, self service Cloud portal" in a single day, Bryant said.

The initiative also includes further investments by Intel, and work with standards bodies and other stakeholders. Intel isn't talking about those other investments and partnerships today, but Bryant said to expect "20 major announcements" from Intel over the coming year.