How a burglar can make a copy of your door key, from a Facebook picture 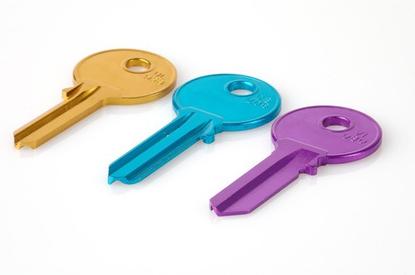 What you shouldn't do with your keys – upload a picture of them to Facebook. With a 3d printer a thief might be able to make a functioning copy, just from the image.

Place a key on the table and bring out the smartphone camera. It clicks and the screen shows a razor-sharp photo of the key. The photo is all you need to print a perfect copy of the key.

No, it's not a scene from some whodunit novel. With the help of two experts, who want to remain anonymous, PC för Alla did it. We took a picture of our own key, and from that picture alone we got a copy that could open our lock.

"Yes, it's possible to copy a key from a photo, in any case if it's a fairly simple key," says Håkan Hedlund, technology expert at SSF, the Swedish Theft Prevention Association.

The risks this carries are obvious. It will only take a couple of careless seconds for the thief, the curious neighbor, or the jealous former girl- or boyfriend to take a photo of your key and create a functional copy.

It's even possible to create keys from peoples' photos on Facebook.

"It is important to take good care of your keys," says Håkan Hedlund. "It may be risky to let them lay about -- and posting pictures of them on Facebook.

The reason it's possible to copy keys on your own is the breakthrough of 3D printers. They don't print texts or photos, but create three-dimensional figures in plastic.

The technology is similar to glue guns or pastry bags for cookies. The plastic is heated until it's liquidated and can be piped through a moving tip. A thin layer of plastic is piped out and dries immediately. When the first layer is done, the tip pipes out a new layer, and a figure is built.

"You can use a 3D printer to print everything from toys and ornaments to spare parts and architectural models," says Anton Månsson, hardware sales manager at Creative Tools.

"It springs of course from the printers becoming cheaper and more flexible," he says.

The material cost is really low. A figure that fits in your palm costs a only a couple of kronor and a small key is even cheaper. The exact cost depends on the object's size and the material used.

"You can use many different kinds of thermoplastic, nylon or wood-plastic composites, but none of the simpler 3D printers can use metal," says Anton Månsson.

In a key this affects the strength. The 3D printed plastic key cannot replace the usual one, but if you only need to open the door once, it works.

There are even 3D businesses, which can replace a locksmith. They scan and save a copy of your key in the cloud. If you lose your key you only have to print a copy in an automat or any 3D printer. US company Keyme and Keysave from Belgium are two of the pioneers.

Keyme and Keysave scan the key from every angle with a 3D scanner. When PC för Alla tested the idea, we used a common picture, like the ones people might publish on Facebook.

It took a bit of work in 3D software to convert the photo to the kind of 3D picture needed for a successful 3D print. 3D software is usually quite advanced and takes experience to master, though the basics can be learned fairly fast.

A weekend of intense studying is enough, and you can teach yourself, at home on your own computer.

"There are plenty of free courses and 3D software online," he says.

Since the cost of the plastic used is negligible, you can afford to test things out.

That it may take several attempts to succeed becomes obvious when we copied our key. The first prints failed, and we had to make more until the key fit. To create the key isn't really difficult; the problem is to get the cuts and grooves in the right places, and that failed in our first attempts. For an experienced burglar this problem might not be such a huge obstacle.

The 3D technology is a huge challenge for the lock industry, even if it hasn't been a big problem in reality -- at least not so far.

"I don't know any cases where criminals have been using 3D printers," says Håkan Hedlund at SSF, the Swedish Theft Prevention Association.

His advice for those worrying is to take care of your keys and use a high-security lock.

The key we managed to print is a common door key, like the ones many of us use. It's fairly simple, and has a form that makes it possible to copy.

Additionally, digital alternatives are being developed. Instead of a physical key you can, for example, open your door with a plastic card or your smartphone.

The problem is that even that kind of technology has been possible to hack.

"No matter what kind of lock you use, it's equally important to be careful and think about how you use your key," emphasizes Håkan Hedlund.

One person who had to think about all this was Christina Eberhardson. She was delighted when she was about to move into a new home in Stockholm and when she got the keys she took a picture of them and put it up on Facebook.

"I wanted to tell my friends that I was going to move," she says.

The picture was sharp and good and the congratulations started to arrive. But then someone mentioned that you should avoid putting up pictures of your keys online.

"I realized that it wasn't such a good idea to put up that photo, but I didn't think about security at all," she says.

She had no idea that it's possible to create a copy of a key from a photo.

"I know that you have to be careful about giving your key to others, since you can make a mold out of clay, but I didn't know that a photo is sufficient.

For Christina Eberhadson there was no damage done; she wasn't going to stay in her new apartment for long -- but she learned something for the future.

"Next time I move I won't take a pic of my key. I might put up one of the front door instead."

How we copied our key -- step by step

1. We begin with placing our key on a table and taking a photo -- with a common smart phone. It's the same kind of photo a lot of people might put up on Facebook. We transfer the photo to the computer and open it in the Paint software. There we crop the picture to exclude everything but the key. We used a common lock from Habo, but it could have been a similar lock from another manufacturer. The brand isn't important in this case.

2. We convert the photo to an eps file with the Inkscape software. Next step is to open the file in a 3D software. We use the 360 Fusion software. It's not free, but you can download a free test version and there are lots of other free alternatives.

3. Then the hard part begins -- to convert the photo to a three-dimensional picture which can be printed from a 3D printer. The first step is to mask the background and isolate the key. We create an outer contour of the key. Since the "teeth" and notches are the main things that makes the key fit in the lock it takes time to get it right.

4. We have a perfect two-dimensional picture of the key and to give it depth we add its height. To set the right value is one of the challenges, since the height isn't visible in the photo. In our case we use another key from the same manufacturer. Except for the teeth, the keys are identical.

5. It's time to make the grooves in the key. Where they are placed is visible in the picture, but to measure the particular depth and angle of each groove we use our other key. When we are satisfied, we save the picture as an sdl file. Sdl is the standard format for 3D prints. We take a look at the preview and start the print. Now the printing of the key begins, all in all it will take about an hour.

6. It takes several prints and we have to whet it a bit as well. When everything is done we put it in the lock, and like a miracle - it actually opens.

The tools we used: