Unity CEO has game development platform's bugs on his mind 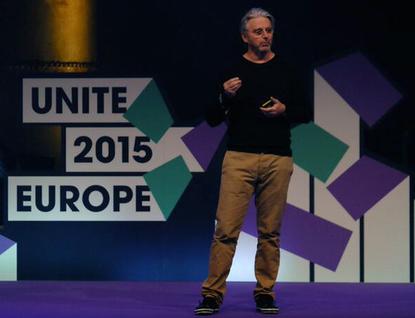 Gaming platform company Unity Technologies is doubling down on improving its software quality, and letting developers know what it has planned for the future with a new public roadmap.

Unity has made a name for itself with a platform developers can use to build games for smartphones, PCs, TVs and game consoles. On Wednesday and Thursday it attracted about 1,000 people to its Unite Europe conference in Amsterdam.

The big announcement was a public roadmap that details Unity's plans for versions 5.2, 5.3 and 5.4, which will arrive in the beginning of September, December and the middle of March, respectively. The aim is to let developers see ahead to which features they will have to work with and which they can commit to when starting a project in the near term, according to Unity.

The first point on the feature lists for version 5.2 and 5.3 is bug fixing, with the summaries "Lots and lots of bug fixing" and "Yet more bug fixing," which CEO John Riccitiello talked about during his keynote on Wednesday and in an interview afterwards.

"We know that we innovate at such a rate, there's so much content coming from us and so many new features that sometimes there is one bug too many out there, or a couple of hundred too many," Riccitiello said.

The company is now making a big investment in getting on top of software quality. While the company has become much faster at fixing bugs, it's going to accelerate the pace, according to Riccitiello.

Unity will continue to push support for many different platforms, and the keynote session showcased games running on iOS and Android smartphones; Xbox One, 360 and PS4 consoles; as well as PCs running Windows, Mac OS or Linux. The latest addition is virtual reality headsets, starting with the Oculus Rift. People are really excited about VR and augmented reality, according to Riccitiello.

Another area Unity has begun to focus on more is analytics.

"I like what we have, but it's just scratching the surface of what's possible. What we are trying to do is give developers a much more powerful understanding of their games and what they can do to improve them," Riccitiello said.

Asked whether Unity was entertaining acquisition offers or considering an IPO, Riccitiello said that for now, that's not something Unity is interested in.

"I prefer that we're private. We can afford to be because the company is profitable and we're growing. Bankers bug us all the time, but that's because they get a commission," he said.