Scheduled to be ready in 2016, FASTER will have the highest-ever capacity across the Pacific Ocean 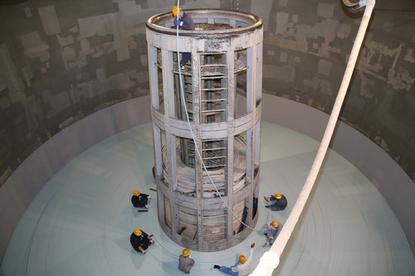 Workers arrange cable for the transpacific FASTER Internet undersea cable system. The 60 Tbps system is scheduled to be ready for service in 2016.

With bottles of bubbly and a purification ceremony, a Google-backed undersea cable was given a warm welcome on a beach in Japan last week, a critical step in building the highest capacity data link in the Pacific ever created.

The 9,000-kilometer FASTER cable will have a peak capacity of 60 terabytes per second (Tbps) when it enters operation next year, joining Japan with Oregon on the West Coast of the U.S.

At the landing site in Shima, Mie Prefecture, east of Osaka, a machine pulled the cable onto the beach from an offshore cable-laying ship while stacks of armored pipes, which shield the link from anchors near the shore, were piled nearby.

A Shinto ritual was held to pray for the success of the project, which will cost roughly US$300 million. The cable was routed into a landing station building that houses optical equipment.

The FASTER cable will also be connected to existing infrastructure offshore at Chikura, Chiba Prefecture, southeast of Tokyo, next month. With six fiber pairs and 100 wavelengths, it will have a peak capacity 300 million times greater than the TAT-1 transatlantic cable of 1956, which could handle 36 telephone calls, or roughly 200kbps, Google said.

Consumers on either side of the Pacific, however, won't have the option of choosing which of the several undersea cables their data goes through.

"It just means that there's more capacity between United States and Japan, and the throughput will be better," said Shota Masuda, a senior manager at the Submarine Network Division at NEC, which is building the new cable system. "You might feel that the Internet experience is a little smoother or faster."

Roughly 99 percent of all transoceanic Internet data goes through submarine cables, which are designed to last decades. Several hundred systems link various parts of the world, and the FASTER cable is scheduled to be ready for service in the second quarter of 2016.