At Google I/O, no huge surprises but a honing of critical products 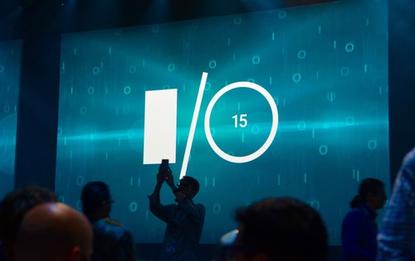 The opening keynote kicked off on Thursday morning, but not before many attendees took selfies in front of the massive wrap-around screen.

Gone are the days of skydivers landing on the tops of buildings wearing Google Glass, or new Chromebooks, tablets and smartwatches. This year, the focus of much of Google's big I/O conference was to propel the Android operating system into new areas others have pioneered, like peer-to-peer payments and smart home appliances.

There were no new hardware platforms, like Google Glass, Android TV or Android Auto. No new smartwatches like the LG G and Samsung Gear Live that debuted last year, marking Google's entrance into the watch market.

Instead, Google confirmed rumors this week by giving us Brillo, a stripped-down version of Android to power things like smart light bulbs and Internet-connected toasters and let them be controlled by Android devices. It might be radical were it not for Samsung, Apple and Microsoft developing similar systems.

And Google tried again with mobile payments, replacing the Google Wallet service with Android Pay as its system for shopping in stores using Android phones. Google Wallet will become a new app to let people send each other money. This is well-trodden territory, with Apple Pay already letting people purchase items in stores with their iPhones, and with apps like Venmo, Square Cash and now Facebook Messenger for peer-to-peer payments.

Yet these might be just the right moves for Google. With these introductions, Google is positioning itself for what may become a popular new form of commerce and for a whole new world of home automation. Meanwhile, other new Android advances revealed at the conference could make the OS more useful and draw more people into Google's panoply of services and devices.

"Google didn't so much play it safe as focus on the big opportunities and tweak their offerings," said Paul Jackson, an industry analyst at Ovum.

This year's conference may also reveal Google as a more mature company, he said, focusing on core opportunities and avoiding repeats of failed products like Glass, Google+, or Nexus Q, a black orb for playing music.

Android is already the world's most popular mobile operating system, installed on the majority of smartphones across the U.S., Europe and China as of the end of March, according to data from Carolina Milanesi, a mobile analyst at research firm Kantar Worldpanel ComTech. However, in the U.S., more people cited the low cost of Android devices as the reason to buy them compared to iOS devices.

New features revealed at I/O make Android devices compelling for reasons besides price. The "Now on Tap" feature in the upcoming Android M release aims to predict what information people will want before they even know they want it, based on their activity inside mobile apps. So if you're reading an email from a friend inviting you to a movie, hitting the home button will show more information about the movie, including a link to its trailer on YouTube.

There were some futuristic technologies at I/O that could be considered radical. Whether Google can turn them into meaningful businesses is less clear.

It showed a smart fabric it developed with sensors woven in. Google said it was partnering with Levi's to create clothing that people could touch to control their smartphones. No details on a launch date or price were given.

I/O also showed Google pushing hard into virtual reality. Cardboard, a low-cost device for VR, launched last year but only worked with Android apps on Android phones. Now it can work with any smartphone, including iPhones, and Google has launched new programs to expand Cardboard content.

One of those programs is Expeditions, a Cardboard app for classrooms that will send students on virtual field trips to places as far away as Mars. But as PCWorld's Florence Ion asks after trying it out, do kids really want to stare inside a box and spin around in a chair?