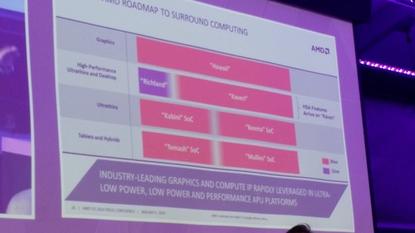 Intel’s 2014 roadmap for tablets and other mobile devices.

Intel and Altera are apparently once again on speaking terms and said to be nearing a deal in which Intel would buy the smaller chip maker for US$15 billion.

News of a possible deal first surfaced in media reports in late March, but those negotiations broke down after Altera supposedly rejected a bid of $54 per share from Intel in early April.

However, the New York Post is now reporting that talks resumed after Altera reported disappointing financial results on April 23.

Altera had sales of $435.5 million for the first quarter of 2015, down six percent compared to year-ago period. Net income for the quarter was also down at $94.9 million from $116.5 million. Altera expected a weak beginning to the fiscal year, but the first quarter was more challenging than anticipated, CEO John Daane said at the time.

Intel is the dominant chip maker and its processors run mainly on PCs and data center servers. Altera, on the other hand, manufactures chips called field-programmable gate arrays (FPGAs), which can be reprogrammed to handle specific tasks and are used by companies in the medical, automotive and industrial fields.

If the deal occurs, it would be Intel's largest acquisition. The merger could be finalized by the end of next week, but it is still possible that talks could falter again, according to the Post's article, which is based on information from anonymous sources and went up on the newspaper's website late Thursday.

Neither Intel nor Altera immediately replied to requests for comment.