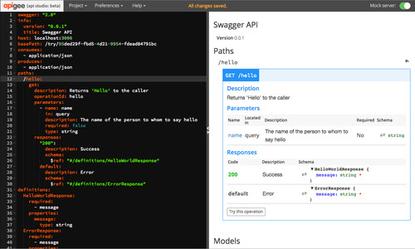 The Apigee API Studio can be used to design, test, and share APIs.

For developers who want to expose their Web applications to other computers and Internet services, API platform vendor Apigee is offering a free online tool to help create APIs using the increasingly popular Swagger API specification.

With the Apigee API Studio, now in available in beta, developers can build REST-based APIs (application programming interfaces) in a browser, and have Apigee mock servers test them to ensure they operate as expected.

REST stands for Representational State Transfer, the dominant architecture currently used by Web applications to exchange data. A REST-based API exposes the functionality of an application through a set of Internet accessible commands.

Apigee is one of a number of companies offering commercial API platforms and associated analytics, competing with MuleSoft, CA Technologies, and Intel's Mashery.

The field of API management seems to be hot among investors. Last month Apigee raised $87 million in an initial public offering. Earlier this week, MuleSoft announced it had completed a $128 million round of financing.

Developers use the Swagger Editor to create APIs. The editor features a range of helpful tools, such as autocomplete, syntax-highlighting, and error-checking. Perhaps best of all, the Swagger editor can automatically generate the documentation as the API is written.

The API can be tested with a built-in mock API server from Apigee, which can mimic a number of different server software stacks. APIs can also be easily shared with others. Once the API has been finished, the developer can download it, as a Swagger node, into a Node.js backend for production work.