The Upload: Your tech news briefing for Wednesday, May 6 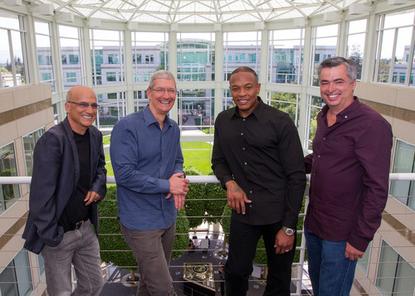 With Apple's new Beats music-streaming service readying a June launch, there's a flurry of reports that its tough deal-making with record labels is drawing the attention of the U.S. Federal Trade Commission. Bloomberg reported that the regulator is investigating whether Apple is using its position as the largest seller of music downloads via iTunes to get better deals than rivals like Spotify. The Verge had earlier reported that both the Department of Justice and the FTC were digging around to find out if Apple was leaning on labels to stop letting streaming competitors offer free music options, so that users are pushed to paid services.

French lawmakers passed a surveillance bill on Tuesday that would increase the government's ability to spy on citizens' Internet and mobile phone activities. The law still has to pass the upper house of Parliament. Opponents say it's vaguely worded and could be used against too broad a range of targets, like advocacy groups, while ISPs and hosting providers are worried about losing customers if the French adopt the same surveillance tactics as the U.S. National Security Agency.

Racks and racks of smaller servers may be taking over in data centers, but Intel sees a bright future for big iron in machine learning, and is bringing out new top-line Xeon E7 v3 server chips to capitalize on the demand for powerful servers. With up to 18 CPU cores, the chips are Intel's fastest, and designed for databases, ERP (enterprise resource planning) systems and analytics that draw on machine learning techniques.

SAP cozies up to Google

SAP is deepening its partnership with Google and will collaborate with the search giant on new projects focused on business analytics and enterprise applications. Look for tighter integration between Google Apps and SAP's Lumira analytics platform, SAP CEO Bill McDermott told the audience at the annual Sapphire user conference in Orlando Tuesday. There are also plans to integrate the SuccessFactors suite with Google Drive.

Facebook will work with IBM to show you more targeted ads

IBM is already letting developers use its online analytics tools to search the Twitter firehose, but now it is set to partner with Facebook to trawl your timeline to determine which ads will work best, the New York Times reports. The deal will allow Facebook to help advertisers better target and personalize ads.

Lawmakers want to protect the freedom to Yelp

If the waiter was rude, your hotel room dirty or the plumber sloppy, you should be able to say so online without fear of getting slapped with a lawsuit, say a group of U.S. lawmakers who want to make it illegal for businesses to use contracts to preemptively muzzle customers so they can't post negative reviews. Four members of the U.S. House of Representatives introduced the Consumer Review Freedom Act after consumer uproar when geek toy company KlearGear.com tried to charge a Utah couple a $3,500 fee for a negative review they wrote.

As Microsoft's new Surface 3 went on sale Wednesday, the company said it would credit owners of older models with up to $150 toward the purchase of the latest tablet, which starts at $499 with 64GB of storage space. U.S. owners of working Surface RTs will get a $100 credit, while the Surface 2 brings $150, Computerworld reports.

Apple may share DNA information via its ResearchKit smartphone platform

Apple may one day allow iPhone users the option to swipe to share their DNA data with researchers and app developers, according to MIT Technology Review. The company is reportedly considering combining DNA information gathered by academic researchers with other health information already gathered by its phones and smartwatches.

No warrant needed for your cellphone location, court rules

A U.S. appeals court ruled Tuesday that mobile phone users have "no reasonable expectation of privacy" for their location tracking data. Historical cell tower location data is not private information owned by customers but belongs to the mobile carrier, the court said -- so pull out your battery if you really, really don't want to be tracked.

Get the highlights from Microsoft's Ignite keynote in 2 minutes.