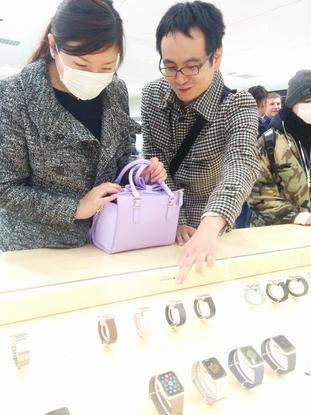 Prospective Apple Watch buyers look at the options on display at mobile carrier SoftBank's Omotesando shop in Tokyo on Friday. About 40 people lined up to get a chance to order the smartwatch.

The Apple Watch made a small splash in Tokyo with its launch, drawing Apple fans but not the crowds that gather for each iPhone release.

A few dozen people lined up at both an Apple Store and an outlet of mobile carrier SoftBank in the fashion district of Omotesando on Friday, when the device was available to try out and order.

Customers, predominantly male, tried on the regular version of the Apple smartwatch and the sport model at SoftBank as attendants offered them bands in various colors and materials. SoftBank staff and journalists seemed to outnumber the customers. Within 90 minutes of its opening, the lineup outside the SoftBank store had dwindled to nothing.

Down the road at the Apple Store, staff were showing off luxury gold versions of the smartwatch, which are priced around ¥1.28 million (US$10,640) to ¥2.18 million, several times the price of the basic sport model at ¥42,800.

The Apple fans who showed up, though, were enthusiastic about the Apple Watch.

"The Apple Watch is kind of like the cool computer wristwatch gadgets on Power Rangers-style TV shows I loved as a kid," said Tomoki Hasegawa, 38, a smartphone app developer based in Tokyo. "I always wanted one, and thought Apple is the company that will do it right."