Tesla founder Elon Musk said that its electric cars could drive themselves today, but not with the reliability that they need to be safe. 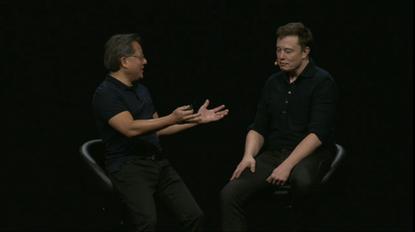 Tesla's cars already have enough technology already inside them to run autonomously, founder and chief executive Elon Musk said Tuesday. They just wouldn't be as safe as they need to be.

And it's computing horsepower, in addition to more sensors, that will be the key to the autonomous cars of the future, Musk said. Musk has become known for upgrading the Tesla through periodic over-the-air updates: In January, Tesla issued an update that improved its acceleration, and this week Musk promised an additional update, which will be announced Wednesday, that will extend the range of the Tesla electric cars. Tesla is already using Nvidia's Tegra chips, and Huang noted that they are being pushed to the limit by the steady drumbeat of software upgrades.

Why this matters:  According to Musk, we've solved the problem of self-driving cars. We know what to do. If that's true, then we only need wait for Moore's Law--and cameras, and chipmakers like Nvidia--to catch up.

"The car that you have, the features are steadily improving," Musk agreed."You now have active cruise control, so it will use active radar to track the car in front of you. It's also looks at the brake lights...it's going to get smarter and smarter, even with the current hardware suite."

Tesla's current sensor suite includes 360-degree ultrasonic sensors, sensitive out to about five meters, plus a forward camera and a forward radar.

"We can certainly make the car steer itself on the freeway, do lane changes," Musk said.

"Autonomy is really about what level of reliability, of safety, do you want," Musk added. "Even with the current sensor suite, we could make the car go fully autonomous, but not to a level of reliability that would be safe at a complex urban environment at 30 miles per hour, with lane markings not there, and children playing, and things coming at you from the side. So in order to solve that you need a bigger sensor suite, and more computing power, and I think what you're doing with the Tegras is super interesting and will really be a super enabler."

To Musk, highway speeds are not the challenge; the complexity of the landscape is. "Highway cruise is easy, low speed is easy, it's medium is hard. Being able to recognize what you're seeing that suburban environment in that 10 mph to 50 mph zone is the challenging portion."

Musk said that Tesla will continue to design for "legacy" drivers, even when cars go fully autonomous. That means including the same structural stability and safety mechanisms to protect the driver in case of a crash with a human-driven vehicle. But, he said, autonomous cars are a "solved problem," with only the technology standing in the way. And that will be solved in a few years.

"In the distant future it will be only outlaws driving cars," Musk said. "Because it's too dangerous. You can't have a person driving a two-ton death machine."