The Raspberry Pi 2 is more powerful, but you still get what you pay for

It has more memory and a better processor than the Pi 1, but comparing it to, say, an Apple Mac would be bananas 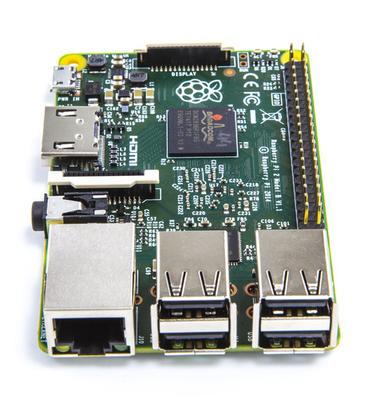 The Raspberry Pi 2 packs more memory and a faster processor than its predecessor, which is enough to turn it into a more functional PC, but don't expect any miracles: It's still a $US35 product.

The Raspberry Pi 2 was launched on Monday at an event in London, and is a big step forward. That's because it has twice the amount of memory -- 1GB of RAM -- as the Pi 1, and is powered by a quad-core ARM Cortex A7 processor running at 900MHz, which is much more powerful that then Pi 1's 700MHz single core ARM processor.

These upgrades are enough to turn the Pi 2 into a usable PC, according to Eben Upton, Raspberry Pi founder and CEO. Even though the original model could be used as a PC, you had to make excuses for it because of the limited hardware capacity, but that is no longer the case with the Pi 2, Upton said.

A system set up at the launch event seemed to confirm that. The menus of the Linux-based Raspian OS were snappy and applications started with little delay. The unit wasn't connected to the Internet and there wasn't enough time to do a proper hands-on evaluation, but at first glance the results were promising.

The Pi 2 is supposed to offer an overall six-time performance improvement over the Pi 1 B+, but the specific impact of the boost will vary by application, the Raspberry Pi Foundation readily admits. The 6X improvement is based on a common multithreaded CPU benchmark tool, but if the application can't take advantage of all cores, the improvement is nowhere near as good.

One way to think of the Pi 2's performance is to compare it to a low-cost smartphone. The 2014 version of the Motorola Moto G is powered by the same ARM technology, but the smartphone's four cores are running at 1.2GHz instead of 900MHz. Still, application types, including games, that run well on the Moto G, should also work just fine on the Pi 2.

At the launch event, the Pi 2 was pitted against its predecessor, the Pi 1 B+, in a demo that used a Python program to create a visual representation of the mathematical constant pi, by using blocks in Minecraft. What the B+ needed almost 50 seconds to render, the Pi 2 did in about 5 seconds.

While the key components have changed, the basics of the Raspberry family have stayed the same, and that's a good thing. There are still four USB ports, an HDMI connector, a Fast Ethernet port and microSD slot for storage. The Pi 2 is also backwards compatible with existing accessories and applications. There is no integrated Wi-Fi, and more advanced storage interfaces haven't been added, but it would be unreasonable to expect the company to add such features and still keep the price at $35.

The Raspberry Pi has exceeded the wildest expectations of its backers, with millions sold since the product first debuted in 2012. That's reassuring, because it shows there is a lot of interest among enthusiasts of all ages in learning more about computers. The original model was used as a home server by students to learn about programming, and in industrial systems.

It will be interesting to see how the Raspberry Pi community takes advantage of the better performance. For example, young people eager to learn about multicore and multithreaded programming now have an ideal platform in the Pi 2.