Conference calls a waste of time? In 1915, this one made history 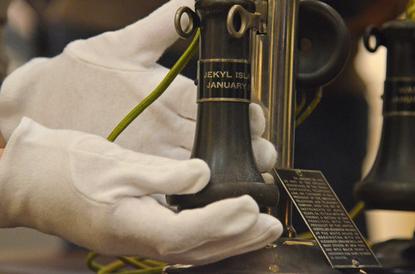 Phones used on the first transcontinental call on Jan. 25, 1915, were unveiled on Thursday in a preview of a centennial exhibit in San Francisco.

These days, making a call across the U.S. is so easy that people often don't even know they're talking coast to coast. But 100 years ago Sunday, it took a hackathon, a new technology and an international exposition to make it happen.

The first commercial transcontinental phone line opened on Jan. 25, 1915, with a call from New York to the site of San Francisco's Panama-Pacific International Exposition. Alexander Graham Bell made the call to his assistant, Thomas Watson. Just 39 years earlier, Bell had talked to Watson on the first ever phone call, in Boston, just after Bell had patented the telephone.

By 1915, the American Telephone and Telegraph Co. network spanned the continent with a single copper circuit 6,800 miles (11,000 kilometers) long that could carry exactly one call at a time. There were already 8.6 million phones served by AT&T, but hearing someone's voice from the other side of the continent was astounding, like being able to go to the moon, said Anthea Hartig, executive director of the California Historical Society.

It was a fitting event leading up to the exposition, which celebrated the completion of the Panama Canal and the latest technological and cultural achievements of the day. Like other big fairs of the day, it was also a theme park of popular attractions and opulent architecture, and it drew almost 19 million visitors.

Where Bell and Watson's first call in 1876 had been a private experiment, their talk across the country in 1915 was a major public event. It represented a huge technological achievement that had been set into motion seven years earlier. In 1909, AT&T president Theodore Vail had pledged to start transcontinental phone service in time for the opening of the exposition -- without knowing how to do it.

At the time, the phone network reached only as far west as Denver. Between that point and the phones on the West Coast lay much of the Rockies, the vast deserts of Utah and Nevada, and the Sierra Nevada. Crews had to install poles and string wires across the whole region using horse-drawn wagons and early automobiles. In winter, they would face 20-foot snow drifts in the Sierra.

But new technology was needed, too.

"The biggest challenge was amplifying sound so it could be transported 3,400 miles," said AT&T Archivist Bill Caughlin. That called for more powerful amplifiers all along the line from New York to San Francisco.

Engineers throughout AT&T competed to solve the problem, just as developers often take each other on at hackathons today. And just as it often happens in Silicon Valley, it was a consultant -- inventor and radio pioneer Lee De Forest -- who contributed the key idea. His three-element vacuum tube formed the basis of the carrier's new amplifiers, used first for the transcontinental line and later for all of AT&T's repeaters for years to come.

In addition to cutting-edge electronics, there were more down-to-earth concerns. AT&T employees had so much ground to cover that they developed a new kind of machine so they could dig holes for telephone poles faster.

If they'd been paying, the participants on that first call would have racked up quite a bill. After Bell and Watson talked, a string of dignitaries including the mayors of San Francisco and New York went on the line. Vail called in from his summer home in Jekyll Island, Georgia, where a special private line had been set up because an injured leg prevented him from going to headquarters in New York. Then U.S. President Woodrow Wilson came on the line from the White House.

It took about 10 minutes just to connect a transcontinental call, because the connection had to be set up step by step with a switchboard operator in each city along the way. The ceremonial call on Jan. 25 took three and a half hours, from 4:30 p.m. to 8:00 p.m. New York time. Then Boston joined in for more conversations -- even one in Cantonese, between the founder of a Chinese telephone exchange in San Francisco and a Southern Pacific Railroad official in Boston.

Later that evening, the line was opened to paying customers. The first call was made by Fred Thompson, at the Stewart Hotel in San Francisco, to his mother, Margaret Thompson, at the Bensonhurst Hotel in Brooklyn. They reported that it sounded just like a local call.

But the transcontinental phone line remained a spectacle throughout the exposition, which ran from Feb. 20 to Sept. 4, 1915. AT&T opened a pavilion where visitors could pick up a phone and hear sounds from across the continent, including musical performances and the Atlantic Ocean.

So, even a century ago, people went to one of the great spectacles of the age and just stared at their phones.