Posts that have been flagged by users will appear less prominently 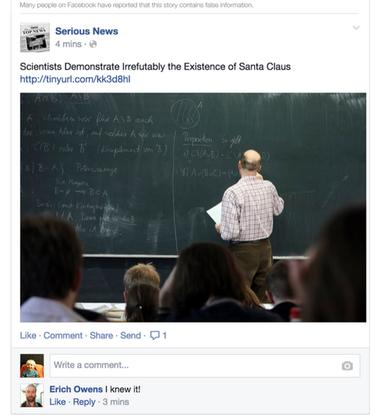 An example of the type of "misleading" story Facebook says should appear less frequently in the news feed.

Looking for proof of the existence of Santa Claus? A search on Facebook might not yield much.

"Hoaxes" or misleading news articles, like a story revealing scientists' proof of the existence of Santa Claus, will appear less frequently in people's news feeds, under changes made to how the news feed ranks flagged content, Facebook said Tuesday. The changes pertain to "misleading" news stories that have been flagged as such, like the Santa Clause story or an article such as "Man sees dinosaur on hike in Utah," and also to scams like, "Click here to win a lifetime supply of coffee."

Facebook itself will not be completely purging news feeds of these types of stories. Rather, Facebook will limit the posting to news feeds of stories that people have reported as false. And, stories that have been reported many times as being false will receive an annotation or note letting users know. Facebook will also demote posts with links to articles that have been reported as false or deleted because the content was misleading.

Users can report a story as "false" by clicking on the dropdown menu on the top right, and following the links to either report it or hide it.

"We are not removing stories people report as false and we are not reviewing content and making a determination on its accuracy," Facebook said in its announcement.

The changes pertain to posts including links, photos, videos and status updates.

But for it to work, it depends on users flagging posts in the right way.

Facebook pointed to a recent post published by the page "Serious News" with the headline, "Scientists Demonstrate Irrefutably the Existence of Santa Claus," as an example of the type of story that would probably appear less prominently under the changes.

But what about stories from The Onion, or ClickHole, which parodies clickbait stories? Satire should not be affected by the update, Facebook said, because people tend not to report satirical content intended to be humorous, or content clearly labeled as satire.

But even if users don't report it, some people on Facebook, it seems, have been tricked into thinking satire was serious. The site "Literally Unbelievable" lets people send screenshots of Onion articles posted on Facebook, many with incredulous comments posted in response by Facebook users.

If users are misled by a post on Facebook, but they don't flag it as being false, its distribution won't change.