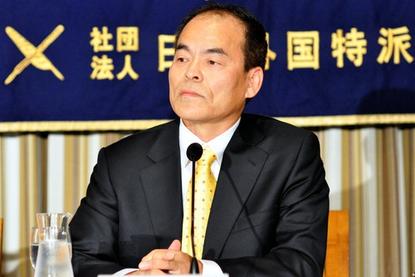 Shuji Nakamura, who shared the 2014 Nobel Prize in Physics for the development of the blue light-emitting diode, addresses journalists at the Foreign Correspondents Club of Japan in Tokyo on Friday.

If you love the lasers of science fiction, rejoice because the future will be full of them, according to Nobel laureate Shuji Nakamura, co-inventor of the blue light-emitting diode (LED).

The power and sparkle of laser diodes, already used in some car headlights, will eventually replace LEDs and become the dominant form of lighting, also increasing the availability and power of wireless communications networks based on light, he predicted.

"There is a limitation to LEDs," Nakamura, a materials science professor at the University of California, Santa Barbara, told a press conference Friday at the Foreign Correspondents' Club of Japan in Tokyo. "By increasing the input power, LEDs become very bright. But the problem is that with the increase of power, the efficiency gradually decreases."

In contrast, the input power for laser diodes can be increased endlessly with very high efficiency, he said, adding that "In the near future, all lighting will be from laser-based lighting."

Laser diodes could also be used as smartphone-controlled projectors, displaying imagery or data on walls or floors nearby, Nakamura said, calling such a system "intelligent lighting."

Beyond providing light and projected displays, laser diodes could lend a boost to wireless communications. He referred to Li-Fi, the optical communications technology that makes use of light instead of radio waves to send data at speeds of 3.5Gbps or more, saying a laser diode-based version would be even speedier.

"The modulation speed of laser lighting is much faster than LED lighting, almost 1,000 times faster, so the Internet speed would become much, much faster," Nakamura predicted.

Nakamura and fellow Japanese researchers Isamu Akasaki and Hiroshi Amano received the 2014 Nobel Prize in Physics "for the invention of efficient blue light-emitting diodes which has enabled bright and energy-saving white light sources." The blue-light LED developed in the early 1990s was a feat that had eluded scientists for 30 years.

In 2004, the Tokyo District Court ordered Nakamura's former employer, LED maker Nichia, to pay him compensation of ¥20 billion (US$180 million) for the invention. He had previously received a much smaller bonus. In 2005, Nakamura settled with Nichia, which had appealed, for ¥840 million.

The lawsuit changed industry practices in Japan and companies have increased their compensation to employee inventors, Nakamura said Friday. But he added that the government of Japanese Prime Minister Shinzo Abe now wants to revise the law in favor of corporations.