iPhone dongle sends 100MB to other iOS devices in seconds 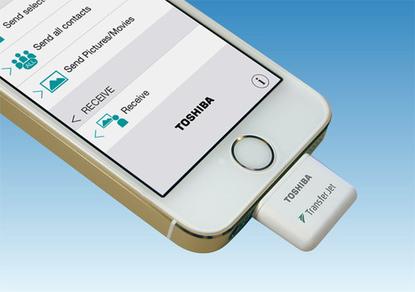 Toshiba's TransferJet dongle for iPhones and other iOS devices can send 100MB of data in about three seconds.

If Bluetooth is too slow for your photo transfers, Toshiba now has a high-speed dongle than can transfer 100MB between iPhones in three seconds.

The TJM35420LT is the first adapter for iOS devices that works with TransferJet, a wireless transfer technology developed by Sony.

It has a maximum data throughput of 375Mbps, according to Toshiba, but devices have to be within 3 centimeters of each other.

The roughly 24 millimeter-square adapter plugs into the Lightning connectors on iPhones, iPads and iPods. Users select data such as movies or images to be transferred and then touch the dongle to another device to send them.

Toshiba's TransferJet dongle for Lightning joins the USB and MicroUSB versions it launched for Windows and Android devices in 2012 and 2013. Toshiba will be showing off the iOS TransferJet unit at CES 2015 in Las Vegas this week, seven years after Sony first demonstrated the wireless technology at the trade show.

Sony has implemented TransferJet in its Vaio laptops and CyberShot digital cameras, and enticed other, mostly Japanese, manufacturers to join the TransferJet Consortium, but the format has yet to gain widespread traction.

The technology's very short range is touted as a security feature, since thieves would have to get very close to intercept a transmission. While Bluetooth has a much greater range, its speed is far less, with Bluetooth 4.0 promising up to 25Mbps via the 802.11 networking standard.

"The launch of the new TransferJet for iOS with Lightning adapter is to meet greater demand of iOS users, who are dominant in the market, especially in Japan," a spokesman for Toshiba said via email.