Sensor views are one reason for the self-driving vehicle's cute, rounded looks 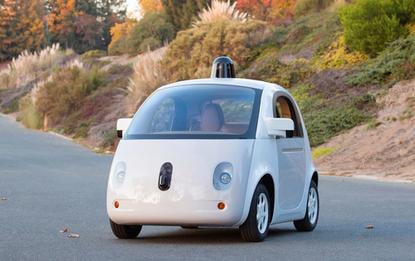 Google has unveiled a complete version of its self-driving car prototype, and said it plans for more tests in Northern California.

If you were hoping for a cooler look for Google's car, you'll have to settle for cute.

The search giant has unveiled a finalized version of its self-driving concept car, which it calls "our first complete prototype for fully autonomous driving,".

While it gave few details about the changes it has made to its initial prototype over the past seven months, the completed vehicle seems to have working headlights and a somewhat more streamlined LIDAR (light detection and ranging) sensor on its roof.

Researchers at GoogleX, the company's moonshot lab, have been tinkering with the vehicle since the two-seater without a steering wheel was first shown off in May. Google had announced plans to build 100 prototypes and begin a small pilot program in California over the next few years.

"We've been working on different prototypes-of-prototypes, each designed to test different systems of a self-driving car -- for example, the typical 'car' parts like steering and braking, as well as the 'self-driving' parts like the computer and sensors," Google wrote in a blog post on Monday.

Sensors are one reason for the car's rounded looks. As Jaime Waydo, a Google systems engineer explained in an earlier promo video: "The sensors are mounted on the vehicle and the edges of the vehicle are really falling away from those sensors to really optimize the field of view so we can be as safe as possible."

Google said its engineers will continue to try out the vehicle on a test track and will take it on the streets of Northern California in 2015.

Calling autonomous vehicles "the future of transportation," California's Department of Motor Vehicles established its first set of rules for self-driving cars in September. They call for tests on public roads as well as test drivers who can immediately take control of the vehicle.