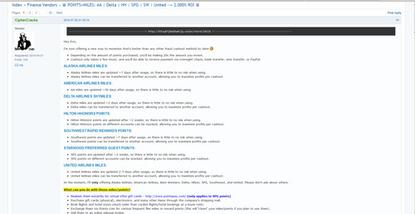 Hackers are increasingly looking for new avenues to conduct fraud to increase their margins, and one fresh target is stealing loyalty card points and miles.

After Sony Pictures Entertainment's computer network was breached in late November, it appeared the hackers wanted to blackmail the company.

"We've got great damage by Sony Pictures," read an email sent to Sony executives. "The compensation for it, monetary compensation we want."

Apparently Sony Pictures didn't give the hackers what they wanted, and gigabytes of data were posted online, including a spreadsheet of all of the company's employees and their salaries.

Though the Sony hackers apparently did not get what they wanted, data clearly has a value. But determining its value depends on a variety of factors. And it's not as easy as it used to be to cash out.

Home Depot lost 56 million payment card numbers and 53 million email addresses between April and September in one of the largest data breaches on record. Batches of stolen card numbers soon appeared on underground forums, priced according to the potential cash-out value.

But banks are acting faster than ever to shut down compromised cards, meaning fraudsters have to steal ever-larger batches of numbers to compensate for lower margins.

For example, if 10,000 cards are stolen, as few as 100 may have the potential for a successful cash out and maybe 10 cards will actually be productive, said Alex Holden, founder and chief information security officer for Hold Security, a Wisconsin-based company that specializes in finding stolen data on underground websites.

It's also become more complicated to steal card numbers because of better cybersecurity defenses, he said.

Hackers need email lists of potential victims, spam messages crafted to evade filters and specialized malware that can slip past antivirus software. Similar to the gold rush, where many profited by selling shovels and mining equipment, there's a healthy trade in such lists and tools. But those expenses all ultimately come out of a hacker's bottom line.

"You can no longer do an operation by yourself," said Holden, whose company discovered data breaches affecting Target and Adobe Systems. "Every person in that chain wants to get paid."

One way fraudsters have attempted to expedite cashing out on stolen card data is by creating bogus merchant accounts with payment processors. That way, cards can be charged to fake businesses in transactions that appear real before card companies have a chance to shut down the numbers.

IntelCrawler, a Los Angeles-based security company, found an advertisement for such a system called the "Voxis Platform." The program lets scammers potentially increase the profit from their illegal gains by scheduling amounts to be charged at certain times to the payment processors.

"Cybercriminals don't have enough resources to monetize stolen data in big volumes," said IntelCrawler CEO Andrew Komarov via email. "It really has a small margin, and it is pretty complicated to resell it in big amounts."

Hackers are also diversifying their targets, capitalizing on the weak defenses of corporate systems.

Hackers are no longer just interested in credit card information, said Stephen Cavey, founder and director of corporate development at Ground Labs, which develops tools for organizations to flag spots in their networks where sensitive data may be stored insecurely. "Now it's about stealing as much personal information that they can get their hands on."

Cavey said he's heard of stolen personal information being used to obtain money from a variety of companies that offer quick, so-called payday loans over the Web. The fraudster's goal is to provide the loan company with as much information as possible to look legitimate and evade risk controls.

Trying to blackmail data-theft victims is another way to make cash. But it's unlikely that large companies such as Sony Pictures would pay a group of hackers not to release data. There's no guarantee that the hackers wouldn't come back with more demands later.

One scam that has resulted in payoffs involves encrypting an organization's data and demanding a ransom. Ransomware has been around for as long as a decade, but the fraud continues due to its success. Computers are infected with malware, which sets to work encrypting files on hard drives.

The only real defense against ransomware such as Cryptolocker is to ensure that data is backed up. Otherwise, it could cost around $500 per computer, payable in bitcoin, to get the decryption key from hackers. In some cases, hackers haven't bothered supplying the decryption key after they've been paid, adding to victims' frustration.

For the near future, Holden says he's seeing increasing interest in the travel industry, with scammers stealing air miles and other loyalty-oriented rewards.

Loyalty miles and points can be cashed out in a variety of ways. The points can be redeemed for items offered through the program, or can be transferred to gift cards, according to a screenshot from a vendor on an underground forum found by IntelCrawler.

Depending on the airline, reward accounts are updated between two to 30 days, the forum posting notes. This gives hackers ample time to redeem stolen points.