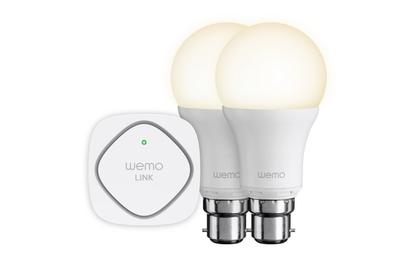 Belkin today announced that it has released more devices for its Wemo home automation system. New Smart LED Bulbs have been added that allow you to replace your existing ceiling and lamp lights with new, smartphone-controllable bulbs.

The new bulbs work off a main Wemo Link, which facilitates the wireless connection between the bulbs and your home Wi-Fi network. Up to 50 bulbs are supported on one Link. The LED bulbs themselves offer an output similar to a 60W incandescent bulb, but they are rated as consuming up to 10W each. Their brightness rating is 800 lumens, and they offer a warm, white colour output (3000 kelvin) that can be dimmed.

Both bayonet and screw mounts are available for the bulbs, and they have a stated potential lifespan of 23 years. Lower power usage and longer lifespans are both incentives for switching to LED lights, but the capability of these Belkin LED lights to be controlled via a smartphone is what makes them more appetising than non-smart bulbs.

Through the Wemo smartphone app (for both Android and Apple devices), the Belkin Smart LED Bulbs can be controlled either individually or in groups, and not only can they be switched on and off, but also dimmed and scheduled. Remote access to the lights can give you an ability to simulate occupancy in your home while you are away, as well as to switch lights on before you enter your home at night, or switch lights off after you’ve left.

A Wemo LED Lighting Starter Set (F5Z0489) is available for $170 and includes a Wemo Link and two LED bulbs. More LED bulbs (F7C033) can be added as your needs change for $50 each. They are available to purchase now from JB Hi-Fi and Dick Smith Electronics. You can also buy them through Belkin's online storefront here.