Twitter, in time for the holidays, puts digital coupons in your feed

The tool requires people to store their payment information with Twitter 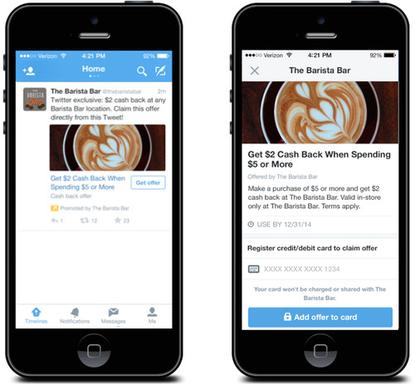 Twitter Offers lets users earn discounts that are redeemed when they make purchases in physical stores.

If ads on Twitter weren't annoying enough, some will start asking for your credit card info, in the hopes you'll load up on store discounts.

Twitter Offers, launched Tuesday, lets companies incorporate in-store promotions in ads that appear in users' feeds. This is not a way to buy things on Twitter; it's a tool to add a discount to your credit or debit card, which can be redeemed in physical stores. The data stands to give Twitter a huge leg up on gauging the effectiveness of its ads on in-store sales.

If enough people go along with it, that is.

Starting in the U.S. only, a handful of brands will include a "get offer" button in their ads on Twitter. It could be, say, $2.00 cash back when spending $5 or more at a particular coffee shop. Click the button, and Twitter will ask for the user's credit or debit card information. The promotion is applied when the user makes the purchase with that card in the store, and the cash back savings appear on his or her statement within a few days, Twitter says. There is no charge to use the offer.

It's not the first offers tool to be offered by Twitter. The company has let American Express cardholders earn discounts by linking their credit card with their Twitter account and having them tweet specific hashtags.

Twitter Offers does away with the hashtag requirement. It also has big e-commerce applications for Twitter down the line. By getting more people to hand over their payment information, Twitter hopes to reduce some of the friction as it scales out the ability to make purchases directly on the site.

Twitter, along with Facebook, has said it's working on a new service to let people make purchases directly from within tweets.