To infinity and beyond… wait, that's not right 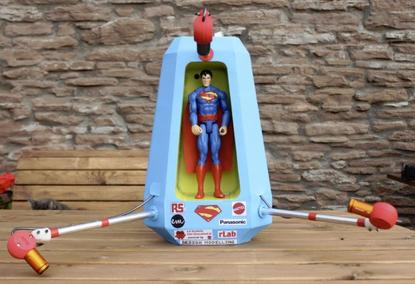 RS Components has collaborated with Mattel to sent one of the toy manufacturer's action figures into space. The Superman action figure replicated the 2012 jump made by Felix Baumgartner from the edge of space.

The project was a combined effort of RS, Mattel Italy and La Scatola dei Giocattoli, a support for Mattel customers. A team of makers, hackers and engineers on the DesignSpark community designed and built a capsule that is attached to a weather balloon.

The craft of electronics and 3D printed components designed for the mission travelled to a height of around 39 kilometres at the edge of space. Superman then free-fell back to Earth. The capsule included a Raspberry Pi mini computer to capture mission data, as well as a specially designed tracking unit to locate and retrieve Superman.

The launch took place on September 12 in the UK at Ross-on-Wye, Herefordshire. During the flight, the mission data (altitude, temperature, weather) was collected along with HD videos and images. Both Superman and the capsule were monitored through a radio connection and a GPS. At the end of the mission, RS posted the video footage and all the design files, bill of materials and design notes so others could build their own.

DesignSpark Community Manager at RS Components, Pete Wood, said the project was a demonstration of the firm’s innovation in engineering design.

"It has been a unique experiment as it involved carefully identifying the several challenges associated with High Altitude Ballooning (HAB) and developing a team of engineering experts who came up with the right plan for the capsule."