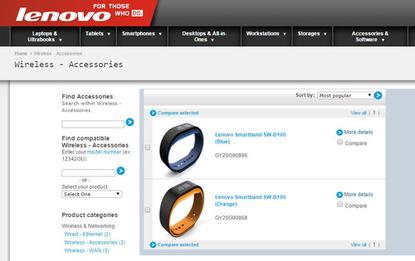 Lenovo has posted information regarding a new smartband product on its website.

Lenovo has posted pictures of its own wearable smartband, hinting that the company could be preparing to launch the product soon.

The Chinese PC maker has a posted a company product page for its "Smartband SW-B100", which is designed as a fitness tracker. It can record calories burnt, steps taken and a user's heartrate, in addition to syncing with a smartphone through an app to provide more complete health data.

Users can also customize notifications and reminders on the smartband, and even use it to unlock a Windows PC without typing in the password, according to the product page.

The smartband can work with Android and iOS mobile devices. It will come in two colors, blue and orange.

Lenovo is joining other PC makers in trying to break into the wearables market. Earlier this year, Acer announced its Liquid Leap smartband and Asus has unveiled a smartwatch, called the ZenWatch.

Analysts, however, expect Apple's upcoming smartwatch to make the biggest splash in the market when it goes on sale early in 2015. In this year's second quarter, Samsung led in the wearable band market with a 30.4 percent share, according to research firm Canalys. Fitbit was second, while Jawbone was third.

Canalys is forecasting that basic wearables, such as fitness trackers, will reach shipments of 15 million units next year. The market for more advanced wearables, such as multi-functional smartwatches that can run apps, will grow even more to 28.2 million shipments in 2015.

Lenovo, although best known for PCs, has been breaking out of its core business, and focusing more on mobile devices. In July, the company showed off its own smart glasses prototype.

Later in August, Lenovo's CEO said the company was working on other wearable products that it would launch next year at the Consumer Electronics Show in January.