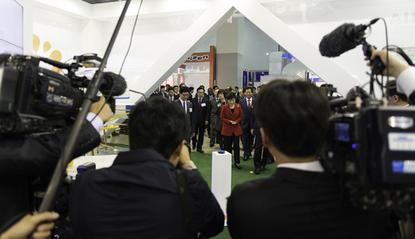 Members of the public will be able to eavesdrop on intergovernmental negotiations about the future of the Internet that began Monday in Busan, South Korea, after participants voted to webcast the meetings.

Following pressure from civil society organizations to open up the discussions, committee meetings at the Plenipotentiary Conference of the International Telecommunication Union (ITU), a United Nations body, will be webcast. At this top policy making event, ITU member states will decide on the future role of the organization, determining its ability to influence and affect the development of information and communication technologies worldwide for the next four years.

Over the next three weeks, the ITU meeting in Busan, South Korea will discuss a wide variety of Internet governance topics including the Internet of Things, online security and online surveillance issues.

On Monday, the ITU decided to give the public access to all the input and output documents of this Plenipotentiary Conference, the world's largest meeting of international policy makers from the information and communication.

Moreover, the public will also be able to tune into live web casts of plenary and committee meetings in 8 languages, which can also be physically attended by members of the public, an ITU spokeswoman said.

However, not all meetings will be public as committee sub-group meetings and regional breakout meetings will not be webcast, she said, adding that the organization can't plan to cover those meetings as they are randomly scheduled. Moreover, conference administration meetings and editorial, budget and credentials meetings won't be public either.

The ITU opened itself a bit more to the public after a group of civil society organisations called on it to be more open and transparent during the Busan conference in an October letter. Though positive steps have been taken in the past to open up the process, more openness is needed they said.

"We believe that wider participation and greater openness are critical to enable all stakeholders to deepen their understanding of the ITU's mandate and role and constructively engage with the important work the ITU does," they said.

While there were some changes made, opening up the committee meetings was expected by the groups who called for more openness about all committee proceedings, including the sub-group talks.

"In my view, all documents should be made available to the public, and accredited civil society organizations should be allowed to participate, as observers, in all meetings," said Richard Hill, a former senior ITU official who signed the transparency letter. "There is an evolution compared to past practices for Plenipotentiary Conferences, but a continuation of what was done for the World Conference on International Telecommunications in November 2012", he added.

The Internet governance talks including 175 member states, sector members and observers will continue until Nov. 7. They will also discuss more transparency and public access to the ITU documents. It is expected though that nothing substantially will happen until the middle of next week.