The service works with Android and iOS devices 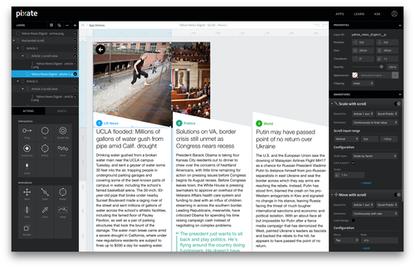 Startup Pixate is offering a tool that lets designers build prototype apps for iOS and Android that run directly on devices, without having to write any code.

Mobile apps have become much more advanced as smartphone screens have grown and processors have become more powerful, but the tools to develop them haven't kept pace with those changes.

"A pain point we have heard over and over again is that interaction design is hard. Designers are making videos, they are making drawings, using Keynote or PowerPoint presentations just to try to show what they want," said Paul Colton, CEO of Pixate, which is based in Palo Alto, California.

Pixate's design tool became generally available Tuesday. Designers can use it to create complex animations and interactions, and see them in full fidelity, running natively on iOS and Android devices.

"The key for us is that it works in real time," Colton said. "You can have multiple Android and iOS devices in front of you, and they will all be changing as you are editing and creating your prototype."

To get their creations onto smartphones, Pixate users have to install an app that works like a runtime, Colton said. The app also makes it possible to share prototypes publicly by sending an email with a link.

To help users get started with the existing version, Pixate has published video tutorials and app demos on its site. The videos show how Pixate's user interface can be used to create animations and add images, for example.

Upcoming features will let users access the camera and accelerometers. Pixate has also started looking at wearables and how it can help developers build the apps designers have created.

Pixate seems to be a well-thought-through tool, said Anders Flygh, user experience designer with consultant Valtech in Sweden. But while it allows for fancier design, it seems to require a lot of effort, he said via email.