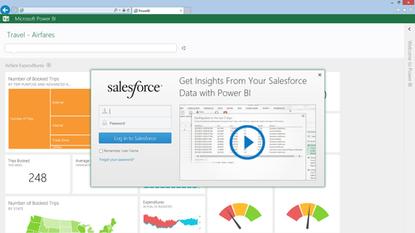 Salesforce's software will soon be tied into Microsoft's Power BI, in just one result of the companies' partnership.

Salesforce.com and Microsoft's budding partnership has yet to produce everything the companies promised in their product-integration announcement earlier this year, but more specific delivery dates have been revealed.

The Salesforce1 mobile application for Windows 8.1 devices is now available as an invitation-only preview, with a general release set for the second half of next year, according to an announcement Monday during the Dreamforce conference in San Francisco.

Also in the works is a broad integration between Salesforce and Microsoft's productivity suite. Salesforce's Files product is currently available and can be used to tap SharePoint files for use within Salesforce.

Work to integrate Salesforce with Microsoft Office, SharePoint and OneDrive for Business on iOS and Android will be completed in the first half of next year. Also expected in that time window is a new Salesforce1 App for Outlook which will be compatible with Outlook 2013, Exchange Server 2013 and Office 365.

While the vendors compete closely in the CRM (customer relationship management) software market, executives have said the partnership comes in response to strong customer demand for interoperability between platforms.