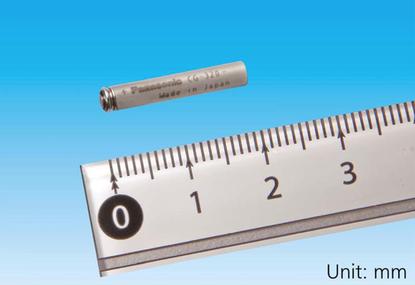 Panasonic's pin-shaped CG-320 lithium-ion battery is 20 mm long with a diameter of 3.5 mm and nominal capacity of 13 mAh. It's aimed at applications such as wearable computers and hearing aids.

Power-sipping wearable devices could become smaller with a new rechargeable battery from Panasonic.

The electronics maker on Friday announced a "pin-shaped" lithium-ion battery that's 20 millimeters long with a diameter of 3.5 mm, about one-twentieth the size of AAA batteries. Panasonic said it's the smallest in the industry in terms of capacity by volume.

The CG-320 battery has a nominal capacity of 13 mAh and voltage of 3.75 V, which allows for Bluetooth and NFC (near-field communication) links with smartphones.

Its compact form factor and low weight make it ideal for wearable devices such as smart glasses, fitness bands and hearing aids as well as electronic pens, according to Panasonic.

While compact batteries could shrink the overall size of wearables, usability and interfaces help determine how big they are.

"The size, which is the smallest of its kind in the industry, can allow more flexible product design, and high strength and stability of form delivers high reliability," a spokeswoman for Panasonic wrote in an email.

The battery could also help reduce the size and weight of wearables, she said, adding that the Internet of Things (IoT) is another possible application.

The CG-320's capacity is lower than that of a wearable battery such as the Jawbone UP24 activity monitor's 32 mAh lithium-ion polymer battery, but the latter is larger.

Panasonic is developing two more pin-shaped batteries with capacities of 30 mAh and 50 mAh. They're slightly larger and heavier than the CG-320.

Battery size and power are a key aspect of wearable devices that has been putting a damper on wider-scale development and popularization. The Apple Watch, for instance, will likely require a daily recharge. That can be seen as a big hassle for a device that's relatively small.

A number of attempts to innovate on materials and control systems for wearable batteries are being pursued.

The U.S. Department of Energy's Oak Ridge National Laboratory has tested a prototype battery based on the lithium carbon fluoride (CFx) chemical formula that could go for 10 years or more without a recharge.

Jawbone, meanwhile, doubled the battery charge of the UP24 to two weeks through a firmware update with enhanced algorithms.

Panasonic's battery is similar to conventional cylindrical lithium-ion batteries. It has negative and positive electrode sheets wrapped around each other inside a small stainless steel tube.

The company plans to mass-produce the battery, with monthly production of 100,000 units and shipping to begin in February. Before that, it will show off the CG-320 at the Ceatec tech expo outside Tokyo next week.