CTIA chief lashes back at FCC chair on net neutrality 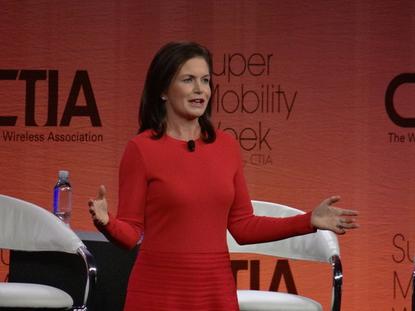 CTIA President and CEO Meredith Attwell Baker speaks on Wednesday in a keynote session at the CTIA trade show in Las Vegas.

The keynote stage at CTIA became a net neutrality boxing ring again on Wednesday as the head of the show's sponsor, CTIA President and CEO Meredith Attwell Baker, sharply disagreed with Tuesday's comments by FCC Chairman Tom Wheeler about how the mobile Internet should be regulated.

Wheeler suggested in a keynote speech Tuesday that wired and wireless networks should be regulated the same way under the U.S. Federal Communication Commission's next set of Open Internet rules. Earlier this year, a federal court struck down the rules that the agency set in 2010 to ensure ISPs treat all traffic fairly. Wheeler said mobile has grown up from what it was in 2010, citing the fact that LTE networks now reach millions of U.S. residents and are faster than wired broadband in some places.

The growth of mobile networks since 2010 proves that specialized rules are best, Baker said during the speech.

"The growth of smartphones and LTE -- and the constant change in our ecosystem -- is the clearest evidence we should retain a mobile-specific approach because it has worked so well for consumers," Baker said.

"Now, I understand that rival platforms want the FCC to put its thumb on LTE, because LTE is becoming -- and becoming is the key word -- more robust and more dynamic," Baker said. "If I were a wired company, I would be nervous about how bright our future is, too, if the FCC keeps the right rules."

Wheeler said "tens of thousands" of the more than 1 million public comments on the FCC's new proposed rules called for treating mobile the same as wired.