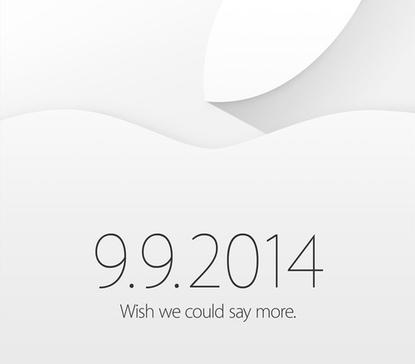 Apple sent out invitations Thursday to the press for an event Sept. 9, confirming persistent rumors that the company would continue what has become an annual late summer industry rite and setting off a new round of speculation that it will announce the iPhone 6.

The invitation itself provides no hint about possible new products, following another Apple tradition of keeping such news under wraps until the event, which is set for 10 a.m. Pacific Time at the Flint Center for Performing Arts at De Anza College in Cupertino, California.

"Wish we could say more," the invitation says.

Rumors have been making the rounds for sometime that Apple will announce an iPhone with a larger 5.5-inch screen. At an event around the same time last year, Apple launched the iPhone 5S, which made waves as the first iPhone with a 64-bit processor.

In addition to a faster processor, any new iPhone will probably have a stronger screen made of durable material called "Sapphire."

There are also been reports circulating that Apple will launch a wearable device, possibly the long-rumored iWatch. New iPads may also be part of the event.