Premium PC brand extends its reach from the desktop into the living room. 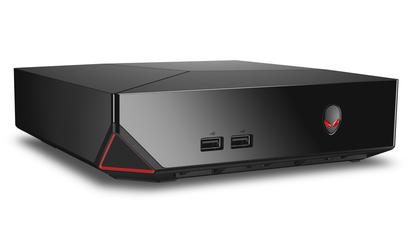 Alienware is moving into the living room with the announcement of its compact Alpha PC.

The premium gaming PC brand, which was purchased by Dell in 2006, has so far been limited to desktop gaming, although the company is now setting its sights on the console space dominated by the likes of Sony and Microsoft.

Dell A/NZ end user computing general manager, Jeff Morris, said that the Alpha is not a media hub slapped on with an Alienware logo.

“The Alienware Alpha is first a foremost a gaming console, but also so much more,” he said.

Morris explained the Alpha has been built with same “freedom and full capability of a PC,” which includes access to web-based content and applications, pictures, videos and music.

The Alpha uses Microsoft’s Windows 8.1 operating system as its foundation, though the familiar desktop and start screen are not immediately shown to the user.

The system instead boots up to a custom Alpha User Interface created by the team at Alienware.

The Windows 8.1 interface is already familiar to users around the world since the operating system launched in 2012, though Morris said a different approach was needed with the Alpha.

“With a completely new chassis design not seen on any other Alienware product, we wanted to create a new user interface with the living room in mind,” he said.

Morris added it was important for gamers to control the console without the need for a traditional keyboard or mouse.

“Our unique UI also provides controller support to modify system settings such as network or Bluetooth, and the dashboard allows for future extensions and new features,” he said.

The “Console” mode essentially displays the Steam Big Picture screen with full controller support, though users who want full Windows 8.1 functionality can switch to “Desktop” mode and connect a keyboard and mouse.

Morris confirms the Alpha is slated for release in Australia later this year, with local pricing and configuration to be revealed at a later date closer to launch.

All that he can share at the moment is that the Alpha was “purpose-built” to be used on a big screen, and by extension, the living room.

“Its small, quiet, and power efficient design lends itself to living room aesthetics, all while delivering the incredible trademark performance you’d expect from an Alienware,” Morris said.

Gamers will also be able to “fully immerse themselves in the gaming experience” by easily connecting a home theatre to the system.

“We want to ensure our gamers will have the same, if not a better, experience playing games on our console in the living room,” Morris said.