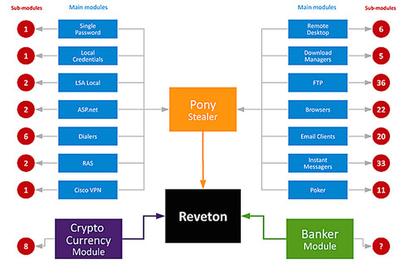 Reveton, a type of ransomware, has been upgraded with new password-stealing capabilities, according to Avast

A type of malware called Reveton, which falsely warns users they've broken the law and demands payment of a fine, has been upgraded with powerful password stealing functions, according to Avast.

Reveton is in a class of nasty programs known as "ransomware," which includes the notorious Cryptolocker program that encrypts a computer's files. The FBI issued a warning about Reveton in August 2012 after its Internet Crime Complaint Center was flooded with complaints.

The malware often infects computers via drive-by download when a person visits a website rigged to automatically exploit software vulnerabilities. Users are helpless after the computer is locked, with Reveton demanding a few hundred dollars as ransom payable various web-money services.

Avast analyzed a version of Reveton that has a module containing the Pony password stealer, which can also steal virtual currency stored on a computer such as bitcoin.

The version of Reveton analyzed by Avast also has another password stealer from the Papras family of malware. It's not as effective as Pony but can disable security programs, the company wrote on its blog.

This particular sample of Reveton was pre-programmed to search a web browser's history and cookies to see if the user had visited online sites of 17 German banks, the company wrote.

Avast speculated the capabilities may have been added to Reveton due to falling profits from merely locking computers in an attempt to extract a ransom. Its authors have "decided to enter into a new black business area," it wrote.

Around February 2013, an ethnic Russian man was arrested in Dubai upon request of Spanish police for allegedly coordinating Reveton campaigns, netting €1 million (US$1.3 million).

Ten other people were also arrested on money laundering charges for allegedly laundering the proceeds and transferring funds to Russia, according to Trend Micro.