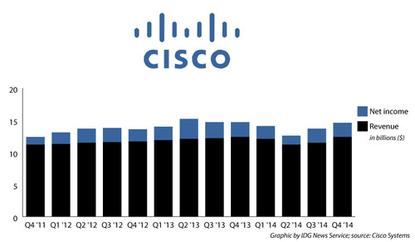 Cisco's revenue and net income for the past three years

Cisco Systems posted fiscal fourth-quarter revenue and earnings that were roughly flat from a year earlier as the company works through what chairman and CEO, John Chambers, called "a tough environment."

The dominant networking company brought in $US12.4 billion in revenue for the quarter ended July 26, equal to the figure it logged in last year's fourth quarter. Its net income dipped slightly, to $US2.2 billion from $US2.3 billion a year earlier, but earnings per share were up by $0.01, reaching $0.43 per share.

The fourth-quarter report closes out a difficult year for Cisco, which began with a first quarter when the company missed its own revenue forecast and posted lower earnings. Chambers blamed slow demand in developing countries and difficult product transitions. Last December, the company cut its long-term revenue growth forecast.