The Nokia X2 will arrive in July for 99 Euros 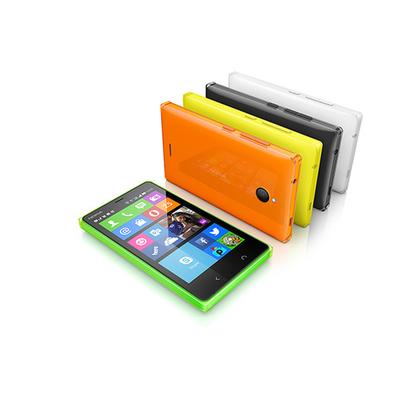 Microsoft is continuing Nokia's Android experiment by adding a new smartphone to the Nokia X series. The next-generation model due in July will feature even more Microsoft software.

Called the Nokia X2, the phone's hardware improves slightly on the first generation of Nokia X handsets introduced back in February.

Before Nokia sold its device division to Microsoft, the company had envisioned the phones as an experiment to help popularize the Windows Phone OS in emerging markets. Although the X series uses Android, the phones' interface is built to closely resemble the tiled design of the Windows Phone operating system. The handsets also heavily feature Microsoft services including Outlook.com, Skype and OneDrive alongside regular Android apps.

The X2 has slots for two SIM cards, and one for a microSD card slot for up 32 GB of extra storage to complement the 4 GB on board. It has a suggested retail price of €99 ($134).

Microsoft is offering its note-taking software OneNote and enterprise social-networking service Yammer with the phone as free downloads.

The company completed its acquisition of Nokia's handset division in April, signalling that it planned to keep the X series, despite the phones using Android. On Tuesday, Microsoft said the X series smartphones were top sellers phones in markets including India, Russia and Kenya.

By buying Nokia's devices division, Microsoft is hoping it can expand further into mobile devices. But so far, the company's Windows Phone OS has struggled to compete against Google's Android and Apple's iOS. In this year's first quarter, the Windows Phone OS had only a 2.7 percent share over the smartphone market, according to research firm IDC.