With IBM and Fujifilm technology, tomorrow's LTO tape cartridges could store up to 154TB of data each 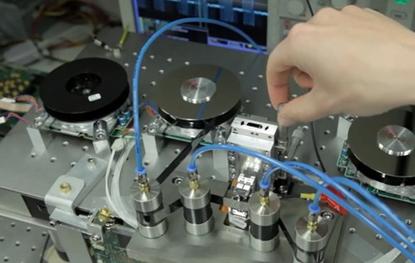 Anticipating a storage crunch spurred by Big Data, IBM and Fujifilm are advancing the state of art in magnetic tape with a prototype capable of storing 85.9 billion bits of data per square inch.

In an industry standard LTO size cartridge, tape like that could store up to 154 terabytes of uncompressed data. Today's LTO version 6 cartridge holds 2.5 terabytes. A terabyte is a trillion bytes, or about 1,000GB.

The companies announced the new prototype at the IBM Edge conference, being held this week in Las Vegas.

Far from being rendered obsolete by hard drives and solid state storage, tape as a storage technology may have a bright future ahead. Tape is still cheaper and more energy-efficient than other modes of storage, making it a natural medium for keeping big data for the long term, IBM argues. It's predicted that by 2020, we will have collectively produced as much as 40 zettabytes, or 40 trillion gigabytes, of data. Back-up files, video and audio archives, extra copies of data for disaster recovery and regulatory purposes all must be kept even if it is rarely used.

The researchers have developed a number of new techniques for squeezing more data onto the tape.

IBM refined the control of the tape head servo, so it can be positioned over the tape with nano-scale accuracy, allowing for finer tracks of data to be written and read. The tape head produces significantly stronger magnetic fields, setting the stage for reading and writing data on a smaller tape surface.

Finally, the team developed a set of signal-processing algorithms that would enable tape machines to capture data with greater fidelity, allowing a 90 nanometer giant magneto-resistive (GMR) read head to be used.

The companies have been working together on pushing the state of the art in tape for the past 10 years. In 2010, the two companies jointly announced that they had packed 29.5 billion bits of data within a square inch of tape.

IBM gave no timeframe for when this technology could be commercialized: it will require additional engineering to fit into commercially viable form factors. The company does maintain a presence in the tape drive market, with its IBM 3592 line of tape drives and related cartridges. As it often does with its research, IBM may license the technology to other storage providers.