Tracking your eyes, Jins Meme glasses tell you if you're tired 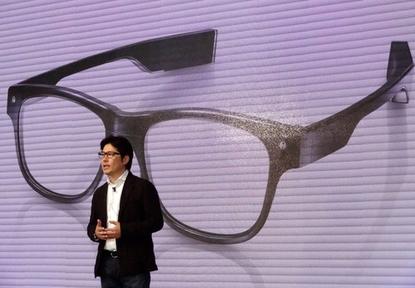 Hitoshi Tanaka, president of eyewear maker Jin, shows off Jins Meme glasses, which can measure alertness by tracking eye movements through electrical sensors. Meme will be released in spring 2015, Tanaka told a press conference in Tokyo on Tuesday.

Are you alert enough to drive? New smartphone-linked glasses from Japan can tell you that by tracking your gaze and eye movements.

They can measure eye strain caused by looking at computer monitors for a long time, as well as track activities for health purposes.

The glasses can also be used to navigate smartphone displays simply by looking left or right.

At first glance, Memes seem to be ordinary glasses, but they contain small metallic electrooculography (EOG) sensors in the bridge, nose pads and the bars that rest on the ears.

The sensors sit on the nose and near the ears of the user, measuring the electrical potential in eye movements. The voltage differences between the cornea and retina can be translated into data for parameters such as alertness, according to Jin.

"Until now, glasses have only been used to see the outside, but now we can see what's going on inside the user," Jin President Hitoshi Tanaka told a press conference in Tokyo on Tuesday.

The company is calling Meme the first consumer eyewear of its kind to use EOG.

It weighs about 36 grams, and also contains a three-axis accelerometer and gyroscope, which can help track steps walked and calories burned.

The temple frames of the device house a rechargeable lithium-ion battery that can power it for about eight hours. A headband attachment with a backup battery can double the operating time.

Meme can be fitted with prescription lenses and will be available in a variety of styles such as sunglasses.

Tanaka demoed the eyewear, showing how it can track gaze direction and blink duration in real time and send the data to a smartphone via Bluetooth. The smartphone menu would swipe left or right when he looked in those directions.

Analyzing the Meme data while comparing it to specific events along a timeline can show how interested a person is in something, he said.

An associated app for Windows, iOS and Android would tell office workers or drivers if they're "a little sleepy" or more tired, with text and sound alerts.

The company, which previously marketed glasses that block fatigue-causing blue light from computer displays, sees a huge potential in EOG technology and plans to offer an SDK for app developers.

Jin plans to launch the Meme in spring 2015 in Japan, but said it hasn't yet worked out plans for possible overseas sales. It said the price is also yet to be determined.