Telstra to extend 4G network to the sky 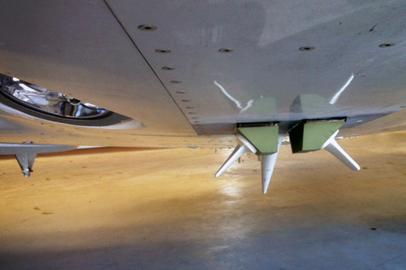 No, it's not a scene from <I>The Empire Strikes Back</I>. It's what Telstra calls a 'shark fin' antenna on the underside of an aircraft. Credit: Telstra

Airplanes may soon no longer provide a refuge from work emails: Telstra has revealed it is testing 4G services for commercial flights.

Under a program called Skinet, Telstra has constructed four dedicated mobile sites covering most of the commercial air route from Melbourne to Sydney. Using upward facing antennas, the antennas can bring users 4G speeds while traveling at high speeds.

Telstra believes the 4G connections could be one day used by commuters and for remote monitoring and control applications.

Telstra has run successful trials of the technology and plans more soon, according to Mike Wright, Telstra executive director of networks.

“In order to test the capability, we borrowed some spectrum to run a number of test flights,” Wright wrote on the Telstra blog.

“We used a number of different aircraft fitted out with special terminals to pick up the signal and we were able to successfully establish and maintain data connections, achieving a maximum data throughput of 15Mbps, with an average throughput around 10Mbps.”

The service will rely on having spectrum along the routes, and Telstra plans to work with relevant authorities to make this happen, said Wright.

“We will look to do additional tests later this year and take those results into account as we explore the possible economics around building a nationwide, commercial LTE network in the sky.”

Adam Bender covers telco and enterprise tech issues for Computerworld and is the author of dystopian sci-fi novels We, The Watched and Divided We Fall. Follow him on Twitter: @WatchAdam