IoT will stump IT until clouds and big data come aboard, EMC says 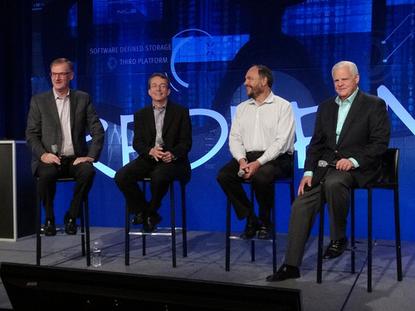 The IT systems of the past 20 years won't be able to handle the emerging Internet of Things, which will call for cloud computing, virtualization, efficient storage and big-data analysis, according to EMC.

As more consumer devices and industrial equipment get connected through the IoT, the flood of data and the opportunities to make things run better will make the familiar client-server systems now in use obsolete, said Paul Maritz, CEO of EMC's Pivotal division.

Maritz and the rest of EMC's top executives used the EMC World conference in Las Vegas this week to sell their vision of a "3rd Platform" of computing driven by mobile devices, big data, public and private clouds and social networking, which they said is replacing a "2nd platform" rooted in client-server technology. The company has combined its core EMC storage business with VMware, RSA Security and the Pivotal division to offer the pieces enterprises need to make the transition.

EMC calls this model a federation and says it lets each division solve separate problems for enterprises or combine efforts with the others. IoT (Internet of Things) makes the best case for bringing all the company's assets to bear, EMC Chairman and CEO Joe Tucci said.

"If I designed something to be perfect for the federation, where everybody contributes, it would be the Internet of Things," Tucci said. IoT calls for enterprises to collect far more data from many more devices and keep it all in EMC storage, such as the Elastic Cloud Storage Appliance the company announced on Monday. Pivotal's big-data platforms can quickly ingest and analyze that data for the enterprise to act on. In the middle of that can be data-center and cloud infrastructure based on VMware's virtual computing and networking technology, Tucci said.

EMC says it's better off operating as a federation than as a monolithic company because the IT world is rapidly changing. Enterprises are calling on EMC and its divisions because traditional IT is being left behind in the face of those changes, said Jeremy Burton, EMC's president, products and marketing. While most IT departments remain focused on classic client-server computing, business management is asking for better mobile-device support, new ways to crunch numbers, and fast development cycles.

Instead, companies are turning to public clouds such as Amazon Web Services. EMC's answer is hybrid clouds, which can combine the scale of public clouds with the security and reliability of internal systems. EMC says its combined assets make that possible.

To help customers build hybrid clouds, on Tuesday the company introduced its Hybrid Cloud Solution, a reference architecture meant as a step-by-step manual for building a hybrid cloud. Also on Tuesday, it announced that the Cloud Foundry PaaS (platform as a service) from Pivotal is now available for off-premises use on vCHS, a public-cloud platform from VMware. Pivotal describes Cloud Foundry as an operating system for the cloud, on which cloud-based applications can run. Delivered on vCHS, it's the first true hybrid cloud PaaS in the industry, VMware CEO Pat Gelsinger said.