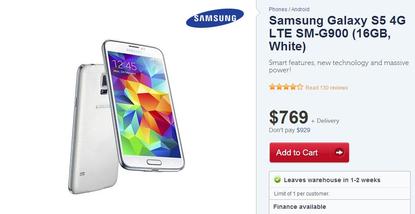 Kogan has dropped the price of the 4G Samsung Galaxy S5 yet again, even though the smartphone has yet to be released globally

Samsung recommends Australian retailers price the Galaxy S5 at $929. Pre-ordering the 4G smartphone from Kogan yesterday would have set you back $849, a saving of $80.

Ordering today will see you pay even less as the rampant discounter dropped the price of the 4G Galaxy S5 to $769, which undercuts the recommended retail price by $160. Delivery times are estimated as between 1-2 weeks.

Samsung will officially launch the S5 on 11 April.

Kogan is selling two versions of the Galaxy S5: the version Samsung is officially launching in Australia, which will feature a quad-core CPU and compatibility with Australian 4G networks, and the international eight-core variant that supports networks up to 3G.

As far as Good Gear Guide can tell, the $769 Galaxy S5 Kogan is selling is identical to the official S5 being released in Australia by Samsung. The eight-core version is still being sold for $799, as advertised at the time of writing.

Kogan’s representatives could not confirm whether the new pricing is for a limited time:

We can't predict what prices will do in the future as there are many factors involved.

The online retailer has a history of quickly revoking heavily discounted smartphones. Kogan previously offered the Galaxy S4 for $430 (including shipping) in September of 2013. After verifying the pricing was correct via its official Twitter account, the retailer rescinded the promotion and offered disgruntled customers a credit.