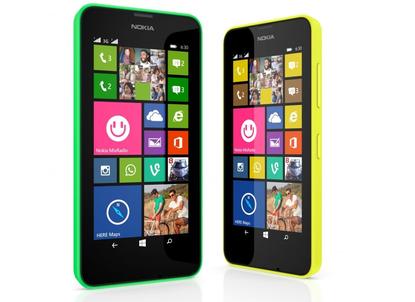 Nokia will be the first smartphone company to make a Windows Phone compatible with two SIM cards. The company, which is currently being acquired by Microsoft, announced the release of two new smartphones at the Microsoft Build conference in San Francisco.

The Lumia 630 and Lumia 635 are almost identical spec-for-spec, apart from one key difference: the 630 snubs 4G connectivity in favour of accommodating a second SIM card. Other than that, the two smartphones are a splitting image.

The Windows 8.1 smartphones have a 4.5in screen with a low resolution of 480x800 pixels. Powering them is a 1.2GHz quad-core processor and just 512MB of RAM. Memory is catered by 8GB of internal storage and it can be expanded by 64GB through support for microSDXC memory cards.

People interested in taking selfies will have to use the rear 5MP camera as neither the 630 nor the 635 have front facing cameras. Videos max out at high-definition (720p) resolution.

Nokia recently unveiled a range of budget smartphones running Android at the Mobile World Congress; however, the new Lumia's target the mid market.

Nokia Australia has not confirmed the Australian availability of the Lumia 630 and 635. Odds are the Lumia 630 will be available outright alone if it comes to Australia as carriers rarely offer dual-SIM smartphones.

Earlier today Nokia announced its new flagship Lumia 930, a 5in, quad-core smartphone that will challenge the phones from Samsung, HTC and Apple.