The design of Samsung's next flagship phone has to be substantially different from its predecessors, says analyst 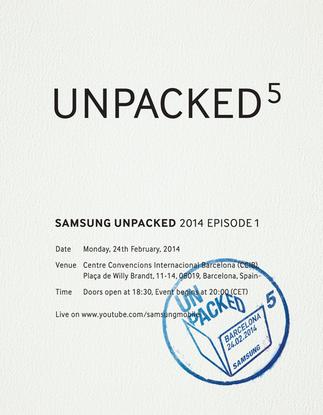 Samsung Electronics is hosting an event it calls Unpacked 5 at Mobile World Congress in Barcelona later this month. There may be others to come this year as it says this is only Episode 1....

Samsung Electronics is planning a launch event dubbed Unpacked 5 at Mobile World Congress, hinting that it will launch the Galaxy S5 there.

That Samsung is organizing a big event is a change from last year when the company instead decided to snub Mobile World Congress for a separate event in New York in March, where it launched its current flagship smartphone, the Galaxy S4. The invite to that event had "Be ready 4 the next Galaxy" written on it.

Mobile World Congress is a great opportunity to launch a new phone, because the whole industry is gathered there, according to Ben Wood, director of research at CCS Insight. But Wood thinks there is a second reason why Samsung is heading back to Barcelona. Reports that Apple is announcing the next iPhone in June have compressed the launch window for competing products that want to get a head start, he said.

Samsung hasn't announced any details on the device or devices it plans to launch in Barcelona. But reports say the Galaxy S5 will have a 5.2-inch screen with a 2560 by 1440 pixel resolution and a 16-megapixel camera with optical imaging stabilization. Potential processors include a new in-house Exynos chip or Qualcomm's recently announced Snapdragon 805 processor, which has four cores running at up to 2.5GHz and is expected to be available in commercial devices in the first half of 2014.

Samsung also recently launched a new chip that will make it possible for the company and others to build smartphones and tablets with up to 4GB of RAM. In contrast, the Galaxy S4 has 2GB and the more recent Galaxy Note 3 has 3GB.

Another important part of the Samsung's next flagship smartphone is the design. The Galaxy S4's plastic shell wasn't well liked by reviewers because it made the device feel less premium than competing products such as the HTC One and Apple's iPhones.

"The design of Samsung's next flagship phone has to be substantially different from the Galaxy S3 and S4," said Wood.

As the high-end segment of the smartphone market becomes more saturated, vendors will have to work harder to get users to upgrade to a new phone. The overall smartphone market is expected to grow by almost 20 percent this year, compared to 38.4 percent in 2013, according to IDC.

The news of the launch event comes as Samsung is also stepping up the distribution of its mobile devices in Europe. Last week, the company announced it was joining forces with retailer Carphone Warehouse to create 60 dedicated Samsung stores in Europe, hoping that will help keep the growing competition in the Android smartphone market at bay.