Samples of the Opteron four- and eight-core, 64-bit A1100 Series ARM processors will ship to AMD partners this quarter 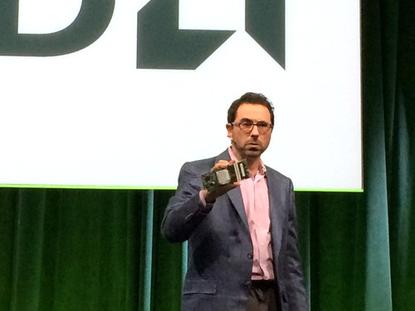 ARM's emerging challenge to the x86 architecture in the server space just picked up some serious momentum as AMD announced it will start shipping sample 64-bit ARM processors, along with associated development kits, to partners in the upcoming months.

"What we are talking about is the industry's only 64-bit ARM server from a proven server processor company," said Andrew Feldman, AMD corporate vice-president and general manager, in a virtual press conference announcing the pending chips.

The company, which announced in September it would be manufacturing 64-bit ARM processors, demonstrated a prototype of its new processor at a summit for the Open Compute Project (OCP) this week in San Jose, California.

"I think it's significant in that AMD has been firmly entrenched in the server market for almost 15 years. They bring a lot of credibility," said Patrick Moorhead, president and principal analyst at Moor Insights and Strategy. There are only three large companies producing processors for servers today - Intel, AMD and IBM. So AMD "validates" the idea of ARM in servers.

The pending AMD ARM processors, which will be under the AMD Opteron A1100 Series (or "A-series") nameplate, will be manufactured using 28-nanometer fabrication technology.

The company will start sending samples of the new CPUs, code-named "Seattle," to partners in March or April, as well as development kits for the processor, including a motherboard and set of development software. "These will allow you to begin exploring your software on a server-caliber ARM processor," Feldman said.

It is also contributing to OCP a server design that can be used to build A-series systems. It will use OCP's common slot motherboard architecture called "Group Hug."

Based on the ARM Cortex A57 core design, the AMD Opteron A1100 Series processors will come in either four- or eight-core configurations, with 64GB DRAM. They will have up to 4MB of shared L2 and 8MB of shared L3 cache, and configurable dual DDR3 or DDR4 memory channels with error correcting code that can run up to 1,866 MT (million transfers) per second.

The processors will be built on a system-on-a-chip (SoC) design and will feature eight lanes of PCI-Express Generation 3 I/O, eight Serial ATA 3 ports and two 10 Gigabit Ethernet ports. They will also have encryption/decryption and data compression co-processors, and up to four SODIMM, UDIMM or RDIMM memory modules.

The AMD Opteron A-Series development kit is in effect a sample bare-bones computer running on the ARM processor. It includes a Micro-ATX-sized motherboard, four DIMM slots that can hold up to 128GB of DDR3 DRAM, PCI Express connectors configurable as a single x8 or dual x4 ports, and eight Serial-ATA connectors.

On the software side, the development kits will have a Fedora ARM Linux distribution, with device drivers and commonly used Web tier applications such as the Apache Web server, MySQL database engine, and the PHP, Java 7 and Java 8 programming languages. It also includes the standard Linux GNU tool chain for developing applications. It is booted through a standard UEFI (Unified Extensible Firmware Interface) secure boot environment.

AMD sees a fit for the new line of processors in servers that run Web applications and data center storage systems.

For well over the past decade, Intel's x86 processor architecture has dominated the market of data center servers, in part due to the chip's low cost from high-volume production, from Intel and even AMD itself.

An increasing number of IT vendors are viewing the ARM chips, which themselves are being produced in large volumes for smartphones and portable devices, as an appealing alternative to x86. They could be less expensive and consume less power while doing the same amount of work.

"One of the things we've learned in the computer industry is that small, low-power, low-cost, high-volume processors have always won," Feldman said.

Last year, more than 8 billion ARM processors were shipped. ARM does not manufacture processors but licenses the design to other companies. In contrast, about 13 million x86-based servers were shipped in the same time period, according to AMD.

ARM and other companies have been building an ecosystem around ARM to support it in the server space. ARM developed the 64-bit design specifically for servers, and interest in the open-source software community, around projects such as Apache, has grown as well. "We have thousands of engineers who are interested and passionate and want to be part of a wholesale change in infrastructure," Feldman said.

The larger data centers and hosting providers might be the first to consider ARM, and, over time, ARM may filter down to enterprise companies as well, Moorhead said.

Moorhead also noted that Intel is not going to cede its dominance in the server space so readily. It has invested billions of dollars into its Atom line of low-power server processors. "Intel has really accelerated its efforts on Atom," Moorhead said, noting the company is planning an SoC design for its Broadwell architecture to compete with the likes of AMD.

Feldman predicted by 2019, ARM processors will be used in a quarter of all data center servers. "At AMD, we intended to be the leader in ARM CPUs," Feldman said.

(James Niccolai in San Francisco contributed to this report.)