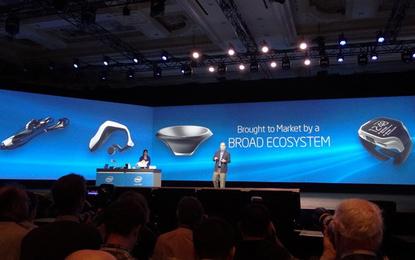 Intel's CEO, battling to keep the company relevant as computing moves beyond the PC, introduced a new line of wearable computers Monday night, including a connected smartwatch and a pair of earbuds with a built-in heart monitor.

CEO Brian Krzanich also introduced a PC the size of an SD card called Edison that's aimed at the growing wearables market. He showed Edison connected to a baby's "onesie" outfit that was fitted with sensors to monitor the infant's health.

Krzanich demonstrated the products during his opening night keynote at the International CES. There was barely a PC in sight, with Intel keen to show that its chips are ready for the new world of tiny, highly portable computers.

One reason wearables aren't more popular is because they must often be paired with another device, according to Krzanich. "They don't always integrate what you want and you always have to have something else with you," he said.

Intel's earbuds solve part of that problem. They have a built in sensor that measures a runner's heart rate so they don't have to be worn with a chest strap. The earbuds don't operate entirely independently, however, as they get their power through the headphone jack in a smartphone.

Similarly, Intel's smartwatch has its own built in communications, so it doesn't need to be paired with a smartphone. It includes a "geo fencing" technology that knows where the wearer is located, and can send alerts based on their movements.

Parents could monitor their children's journey to school, for instance. The watch would know what time a child is supposed to arrive and what route they're supposed to take to get there, Krzanich said. So it will send an alert if the child strays off course or is running late.

"It silently notifies the guardian that you didn't arrive," he said, describing many a child's worst nightmare.

Krzanich said all the products shown Monday would be available this year, though the devices are likely to be sold by Intel's partners and not Intel itself. The company often develops products to steer the industry in the direction it wants it to go.

He also showed an "always on headset" with a voice-enabled assistant called Jarvis that works and operates very much like Apple's Siri personal assistant.

Edison is a "full Pentium class PC" crammed onto a device the size of an SD card, Krzanich said. It's based on Intel's 22-nanometer Quark system-on-chip, runs a full Linux OS and has built-in Wi-Fi and Bluetooth Low Power. It also has an app store on board.

Edison will be available to developers by the middle of the year, and Krzanich announced a competition with a US$500,000 prize for the developer who comes up with the most innovative use for it.

On stage, he showed a baby's onesie that was fitted with sensors to monitor its temperature, pulse and breathing. By clipping a toy turtle with Edison inside onto the onesie, the baby's vitals are broadcast to the parents.

But instead of being sent to a PC or a smartphone app, the data was sent to a pair of smart coffee mugs that flashed colored lights when the baby needed attention. A smart milk bottle warmer nearby began to heat milk as soon as the baby started crying.

It's a whole new world of embedded computing that Intel and other vendors at CES hope to propagate, but whether people will respond to that much technology in their lives remains to be seen. The industry has a tendency to develop technologies and find out later if people want to use them.

Such pervasive computing will raise new concerns about privacy and security. To help address security, Krzanich announced that parts of Intel's McAfee security software will be available free of charge this year for use in all mobile devices. McAfee products will also transition to a new Intel Security brand over time.

"It doesn't even have to be IA (the Intel Architecture)," Krzanich said. "It could be ARM, it could be anything."

It will be up to device makers if they want Intel's security software in their gadgets, but if they do it could be a handy way for Intel to get its technology into more phones and tablets.

Krzanich also talked about the growing use of tablets in the workplace, where he said people need both Android and Windows. To that end, he announced what he called "the world's first dual-OS system running both Windows and Android."

It's a tablet that lets the user switch quickly between Windows and Android, apparently at the push of a button, without needing to reboot the system. He didn't say when it would be offered as an actual product or who by.

These capabilities will revolutionize how business gets done," according to the Intel CEO.

He also showed additional uses for the RealSense 3D imaging technology that Intel announced earlier Monday. It's a camera sensor that fits into a laptop or tablet and can build a 3D map of what it sees, a bit like the technology in Microsoft's Kinect.

An engineer created a 3D scan of an Intel "bunny" toy, then used design software to turn the 3D image into a key ring. He then printed the key ring on stage using a 3D printer.

The idea was to show how businesses could use RealSense to change the way they design and prototype products, one of the big emerging uses for 3D printing.

Krzanich was giving the opening night CES keynote that for more than a decade was given by Microsoft's Bill Gates or Steve Ballmer. Last year the slot went to Qualcomm CEO Paul Jacobs, and Krzanich managed to put on a show with a few surprises this year, even if it's up in the air whether the technologies will catch on.