Amazon plans to use drones to deliver packages

The futuristic service will cut delivery time to 30 minutes or less, according to Amazon 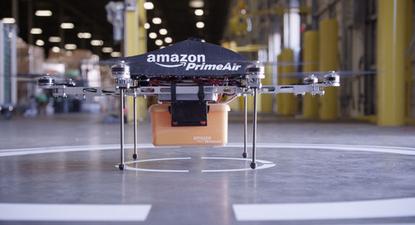 Amazon's proposed drones will deliver packages in 30 minutes or less

"It looks like science fiction, but it's real," Amazon said on its website. Its Prime Air service, powered by drones, will be ready from a technology point of view to enter commercial operations as soon as the necessary regulations are in place, it said. The company's research and development team is already working on the new delivery method.

Amazon's plans, however, will depend on rules for civilian unmanned aircraft from the U.S. Federal Aviation Administration, which it expects by 2015. "We will be ready at that time," it added.

The Amazon drones will be able to deliver five-pound (2.3 kilogram) packages, which account for about 86 percent of items delivered by the company, CEO Jeff Bezos said in an interview on CBS TV news show 60 Minutes. The electric-powered drones will be able to deliver packages within a 10-mile radius from a company fulfillment center, he said. The drones follow instructions based on GPS coordinates of the delivery location, Bezos said.

Putting Prime Air into commercial use will take some number of years as the company advances the technology and waits for the necessary FAA rules and regulations, the company said on its website. But "one day, Prime Air vehicles will be as normal as seeing mail trucks on the road today," the company said.

The vehicles will be built with multiple redundancies and designed to commercial aviation standards, Amazon said.

The online retailer was the most visited retail property during the Black Friday holiday shopping in the U.S. last week, followed by eBay and Walmart, according to digital measurement and analytics firm comScore.

Amazon has been adding new programs to speed up delivery of packages to customers. The company announced last month that it tied with the U.S. Postal Service to deliver packages on Sundays to its customers. The company said it would start the service in Los Angeles and New York, with plans to roll out to "a large portion" of the U.S. population by 2014. In 2009, it introduced a same-day delivery service, called Local Express Delivery, for select locations.