The US government has 'no excuse' for the problems that have plagued HealthCare.gov, the president says 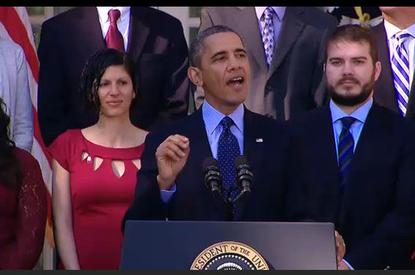 U.S. President Barack Obama promises Monday that the ailing HealthCare.gov will be fixed.

More than a half million U.S. residents have signed up for health insurance under the Affordable Care Act despite ongoing problems with HealthCare.gov, one of the main ways to shop for the new health plans, U.S. President Barack Obama said Monday.

There is "no excuse" for the problems that have plagued HealthCare.gov since the site went live Oct. 1, Obama added during a speech. He promised the problems with the website being slow and users being unable to complete their applications would be fixed, with the administration bringing in some of the "best IT talent" in the U.S. as part of a so-called tech surge announced Sunday.

"Nobody's madder than me about the fact that the website isn't working as well as it should, which means it's gonna get fixed," Obama said. "Everybody who wants insurance through the marketplace will get insurance. Period."

Obama's speech came as The New York Times, quoting anonymous contractors working on the website, said it may take weeks before HealthCare.gov is working properly.

Obama didn't break down where the more than 500,000 U.S. residents who've signed up for health insurance completed their applications. In addition to HealthCare.gov, residents can sign up for insurance under the so-called Obamacare law through the phone and in person at community health centers and hospitals, and 16 states are operating their own health insurance marketplaces.

HealthCare.gov has had nearly 20 million visitors since Oct. 1, Obama said.

The Department of Health and Human Services has hired more phone operators to staff call centers for people who want to sign up over the phone, Obama said. The agency will also contact people who've tried to sign up for insurance on the website and have encountered problems, he said.

U.S. residents without health insurance still have more than five months to sign up for health insurance in an open enrollment period, Obama noted. Many people who've signed up have been able to buy insurance for the first time or have saved hundreds of dollars a month in premiums, he said. One Pennsylvania man wrote Obama that he and his wife will save about US$900 a month by buying insurance through Obamacare.

"The product -- the health insurance -- is good," Obama said. "The prices are good. It is a good deal. People don't just want it, they're showing up to buy it."

While much of the criticism of Obamacare has focused on the website problems, the 2010 law is not "just about a website," he said.